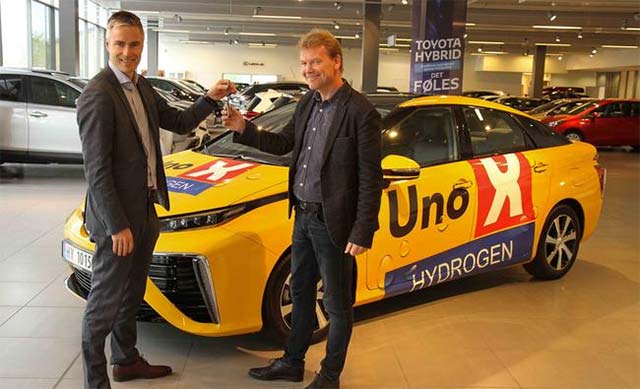 Uno-X Hydrogen, a newly established joint-venture that plans to establish a 20-station hydrogen network by 2020 in Norway, is the very first customer of the country to take ownership of the Toyota Mirai.

One of the major advantages being that driving the Toyota Mirai is completely emission free, the process to produce the fuel for the car is not fully yet.

Uno-X Hydrogen is stepping up to the plate: the first of the 20 planned stations will use the surplus solar energy produced from the solar panels on the roof of the neighbouring energy-positive office building.

After receiving the keys of the Toyota Mirai, Roger Hertzenberg, Managing Director of Uno-X Hydrogen commented: “Today we are very excited to receive the new Toyota Mirai with zero emissions. Uno-X wants to contribute to making hydrogen cars a real alternative for all households. We are happy to see that the majority in the Parliament has agreed to a support program for hydrogen infrastructure. This means that we can start building stations as the cars are coming to the market.”

The Norwegian government recently not only confirmed its support to a nationwide network of hydrogen refueling stations, it has also set up programs with the aim to reach sales of 50,000 hydrogen cars by 2025. The program offers many incentives that will make fuel cell cars even more attractive: these cars are exempt from registration taxes and value added tax, which can be very high in the country. Additionally, cost of ownership is further reduced for Norwegian fuel cell car drivers thanks to free toll roads and ferries, free public parking, access to bus lanes and 50 % company car tax.

During a small ceremony that followed the delivery of the Mirai to Uno-X Hydrogen, Espen Olsen, General Manager PR from Toyota Norway said: “We are pleased that the first Mirai in Norway will be delivered to Uno-X hydrogen, a company that will contribute strongly to build a comprehensive hydrogen fueling network in Norway. Toyota has made a clear commitment to reduce the CO2 emissions of its new vehicles by 90% in 2050 (versus 2010 levels). We believe hydrogen fuel cell vehicles will be essential to achieve our ambitious targets.”

Toyota has been engaged in the research and development of automotive hydrogen fuel cell technology for over 20 years. The result of this hard work is the Toyota Mirai, a remarkable zero emission car with a driving range of up to 550 km that can be refueled in 3 to 5 minutes. Toyota started commercializing the Mirai in 2015 and to date has delivered cars in Japan, California, Germany, UK, Denmark and Belgium with the Netherlands and Sweden to follow later this year. Toyota is now continuing its Mirai roll-out in Norway.