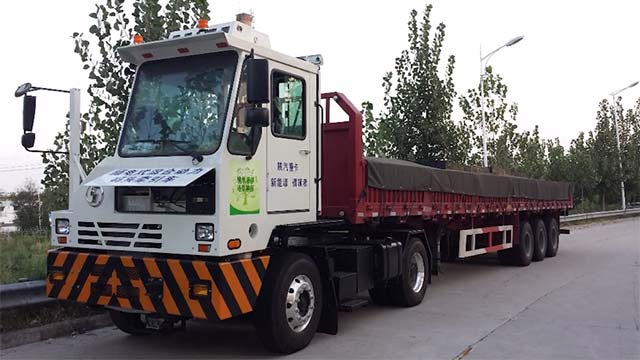 Efficient Drivetrains, Inc. (EDI announced their newest clean energy innovation—a fleet of PHEV trucks for the Port of Shanghai built in collaboration with one of the world’s largest truck manufacturers, Shaanxi Automotive.

The PHEV port truck is capable of operating at 99,000 pounds (44,907 kg) gross vehicle weight (GVW) with electrified vehicle accessories—including air conditioning and heating—allowing the use of accessories for driver comfort without idling the engine. The PHEV port truck provides all-electric zero emissions driving capability as well as parallel and series hybrid operation.

EDI’s PHEV port trucks will be used to replace conventional fuel vehicles of the same specifications with significant fuel saving and emissions reduction while still maintaining the same power and performance.

Shaanxi is forecasting acquiring up to 200 PHEV Port trucks over the course of 2016.


The government of China is currently aggressively asserting mandates and regulations to improve air quality and reduce emissions, putting increasing pressure on city officials. Shanghai in particular is working toward the country’s emissions reduction goals, emulating best practices of the State of California to drive toward better air quality. A large area of concern is their port, where heavy-duty trucks are used to move shipping containers and transfer large crates during shifts that run the fuel engine as long as 20 to 22 hours a day without stopping. The idling vehicles produce noise, fumes and heavy levels of emissions, all of which are eliminated with the use of EDI’s PHEV trucks specifically designed for port conditions.