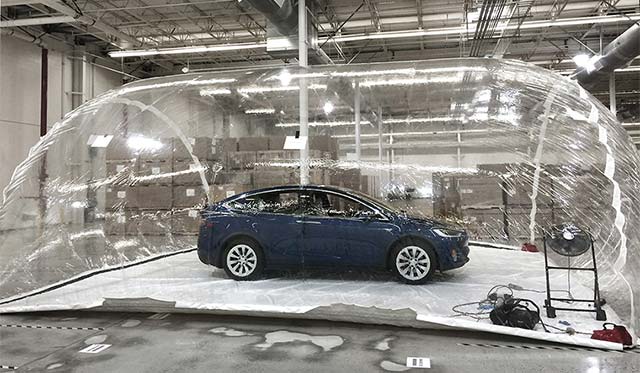 Air pollution has a significant and pervasive impact on public health. According to the World Health Organization, it is now considered “the world’s largest single environmental health risk,” with more than three million people dying every year as a result. This is more than twice the number of people that die in vehicle accidents each year.

Inspired by the air filtration systems used in hospitals, clean rooms, and the space industry, Tesla developed a HEPA filtration system capable of stripping the outside air of pollen, bacteria, and pollution before they enter the cabin and systematically scrubbing the air inside the cabin to eliminate any trace of these particles. The end result is a filtration system hundreds of times more efficient than standard automotive filters, capable of providing the driver and her passengers with the best possible cabin air quality no matter what is happening in the environment around them.

The air filtration system was put to the test in real-world environments from California freeways during rush hour, to smelly marshes, landfills, and cow pastures in the central valley of California, to major cities in China. Tesla wanted to ensure that it captured fine particulate matter and gaseous pollutants, as well as bacteria, viruses, pollen and mold spores.

The Palo Alto-based carmaker then decided to take things a step further and test the complete system in an environment where they could precisely control and carefully monitor atmospheric conditions. A Model X was placed in a large bubble contaminated with extreme levels of pollution (1,000 µg/m3 of PM2.5 vs. the EPA’s “good” air quality index limit of 12 µg/m3). Tesla engineers closed the doors and activated Bioweapon Defense Mode.

In less than two minutes, the HEPA filtration system had scrubbed the air in Model X, bringing pollution levels from 1,000 µg/m3 to levels so low as to be undetectable by the instruments.

Not only did the vehicle system completely scrub the cabin air, but in the ensuing minutes, it began to vacuum the air outside the car as well, reducing PM2.5 levels by 40%. In other words, Bioweapon Defense Mode is not a marketing statement, it is real. You can literally survive a military grade bio attack by sitting in your car.

Moreover, it will also clean the air outside your car, making things better for those around you. And while this test happened to be done with a Model X, the same would be true of the new Model S now in production. 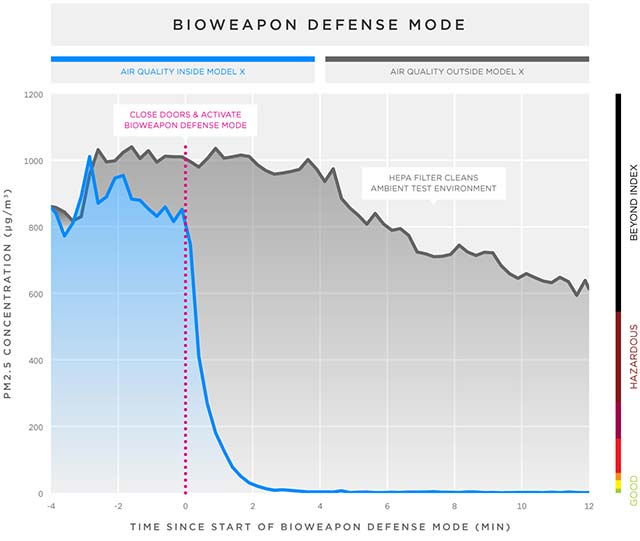