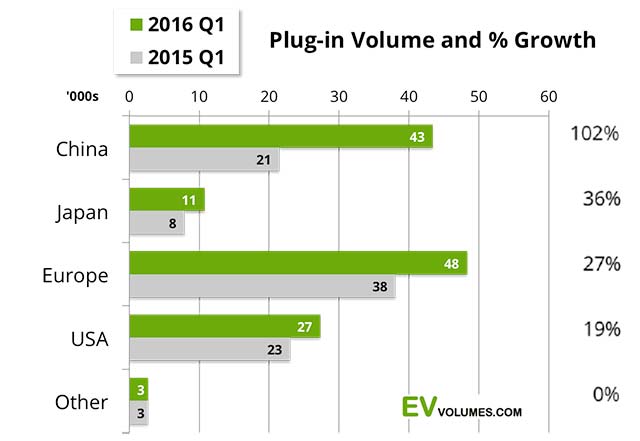 Plug-in vehicle sales worldwide so far are 180 500 units including preliminary data for April, according to new figures from EV-Volumes, an EV sales database and consultancy.

This is 42 % higher than for the same period in 2015. These include all global BEV and PHEV passenger cars sales and a few light commercial vehicle in Europe.

Growth slowed down compared to last year, which was 71 % higher than 2014. Q4-2015 was particularly strong, in anticipation of lowered incentives in a number of markets for 2016, notably in the Netherlands, Denmark, Sweden and for mini-EVs in China.

Growth by region for Plug-ins
China is still the growth motor for plug-in sales. “New Energy Vehicle” volume for passenger cars more than doubled in the first quarter and the preliminary April numbers show a similar result. 100 % growth is much more than in any other region, yet, the days of 2- or 3-fold sales increases are probably over.

Europe struggles to continue on the 99 % growth rate of last year. Most markets develop strong, but the incentive changes for PHEV in the Netherlands and EVs in Denmark darken the overall picture.

Tesla Model 3 – The Big Leap
The most exciting event in the plug-in scene this year was the unveiling of the long awaited Tesla Model 3. Crowds cheered in front of Tesla stores around the world and the first 100 000 units were reserved before the public presentation. No-one had seen one, let alone driven one.

Starting at $35 000, 200+ mls range, $1000 deposit, deliveries to start “late 2017”, was all what was known. And yes, it’s a Tesla. After the first public showing and during the following 3 weeks, reservations approached 400 000 units. Reduced by some bogus bookings the “official” number in Teslas quarterly SEC filings is 373 000. The current tally could still be a lot higher.

The demand is comparable to the annual global sales of e.g. Audi A4, BMW 3-Series and Mercedes C-Class, indicating the potential for EVs with competitive price, style, space, acceptable range, superior performance and efficiency. Does it need subsidies to be good value? Most probably not.