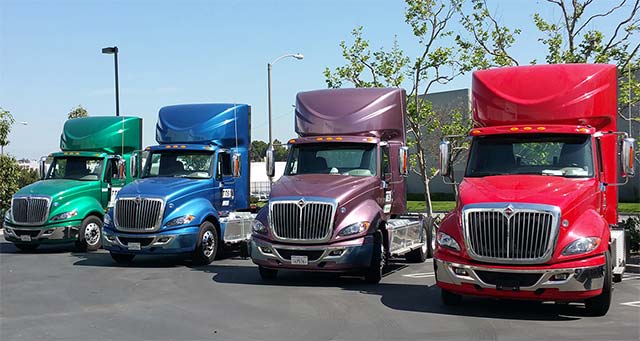 The State of California is awarding $23.6 million to the South Coast Air Quality Management District (SCAQMD) for a statewide electric drayage truck development and demonstration project.

This is the first large-scale demonstration of zero-emission Class 8 trucks that involves major manufacturers, including BYD, Kenworth, Peterbilt (both Paccar companies) and Volvo. The companies receiving funds have the engineering resources, manufacturing capabilities and distribution networks to support commercialization of advanced technologies related to moving freight to and from the ports.

The South Coast air district is teaming up with air districts in the Bay Area, Sacramento, San Diego and San Joaquin Valley to make the project a statewide demonstration of 43 zero-emission battery electric and plug-in hybrid drayage trucks built by the four manufacturers serving major California ports. Demonstration trucks and charging infrastructure will be used in all five air districts, providing emission reduction benefits in key areas of California with drayage truck activity.

The proposal will support the development of three different zero emission truck propulsion configurations. Full battery-electric trucks will be developed by BYD and a team consisting of Peterbilt and California start-up TransPower. Volvo will be deploying a plug-in hybrid electric diesel truck under the Mack brand. A fourth team, involving both Peterbilt and Kenworth, partnered with BAE Systems, will be deploying a truck that uses a natural gas engine to recharge the batteries and provide the capability to operate in zero emission mode.

CALSTART worked with the air districts to help identify and recruit some of the key truck makers and suppliers. As a member of the winning proposal team, CALSTART will serve as an advisor and provide technical support to the project. CALSTART will focus on strategies to help develop the market and commercialize the trucks deployed and tested under this grant.

This marks the single largest grant ever made to advance zero emission trucks serving ports in the United States. The total investment in the project was $40 million. The California Climate Investment funds (generated from the GHG Cap & Trade program) were matched by approximately $16.4 million in funding from the regional air districts.