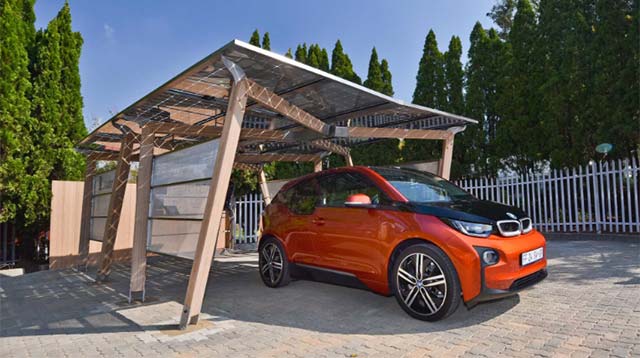 As part of the expansion of its 360° ELECTRIC portfolio for BMW i Home and Public Charging Services, BMW South Africa unveiled its first solar carport that will be rolled out locally from July 2016.

The BMW i solar carport supplies an average of 3,6kW of solar power (at peak times on a clear sunny day) straight to the BMW i Wallbox, which is used to show a live readout of how much power is being generated by the sun and charge electric and plug-in hybrid BMW models.

The BMW i solar carport concept was first shown at the BMW i8 international media launch in Los Angeles in April 2014 as well as the Consumer Electronic Show (CES) in January 2015.

“With the rollout of the BMW i solar carport, the BMW Group is demonstrating its commitment of shaping the future of individual mobility – not only with ground-breaking products and services, but also with the global as well as local involvement in the expansion of home and publicly accessible charging infrastructure for electrically powered vehicles. With innovative services like the solar carport, BMW is the first vehicle manufacturer to offer such a broad-based EV smart charging product to reduce costs for customers,” says Mr Tim Abbott, Chief Executive Officer (CEO) of BMW Group South Africa and Sub-Sahara.

In the coming months, BMW Group South Africa will expand the installation of the solar carport in major city centres such as Johannesburg, Cape Town and Durban for public charging. Customers and fleet companies will also be able to order the solar carport for home and office charging. Produced by Sunworks – designer and installer of photovoltaic solar systems – the BMW solar carport is made of high end bamboo and stainless steel housing for the glass solar modules, the solar carport is in line with the BMW i design and production philosophy, which prioritises a zero carbon footprint.

Bamboo is considered a particularly sustainable and high strength-to-weight ratio natural composite material useful for structures. “We have always emphasised that in order for electric vehicles and plug-in hybrid electric vehicles to be successful, we need to firstly increase consumer confidence in the viability of electric vehicles and secondly make public charging easily accessible for customers who purchase these cars. The rollout of the solar carport is also an emphasis on this philosophy,” Abbott adds.