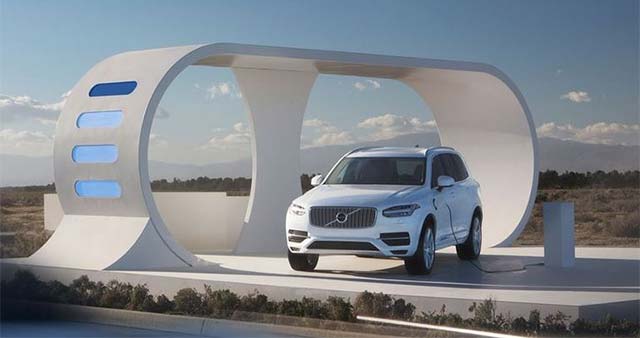 In an effort to beat their chest while also promoting the new Volvo XC90 T8 plug-in hybrid, the engineers at Volvo designed a hydraulic power-generating system that uses the kinetic energy of passing cars to charge the XC90.

Called “Highway Robbery”, Volvo’s newest project aims to spark engagement and conversation worldwide about how to innovatively create new paths toward a future that is both cleaner and more powerful.

The unique campaign, hosted in Southern California in late March, proves power truly can come from unexpected places, with the all-new XC90 T8 Twin Engine taking the title as the first plug-in hybrid vehicle to be powered by gas, electricity…and other vehicles. Over the course of two days, Volvo, together with its advertising agency, Grey New York, used a custom peristaltic pump placed over the roadway that, when vehicles drove over it, generated electricity to fuel the nearby charging station – and the XC90 T8 connected to it.

As the world’s first plug-in hybrid, seven-seat SUV, and a combination of 400 horsepower and a 53 MPGe EPA rating, the XC90 T8 offers power and efficiency, all at a starting MSRP of $68,100.

“The all-new Volvo XC90 T8 proves that great power can come from anywhere, from traditional engines to electric motors, and beyond,” said John Militello, Director of Marketing, Volvo Car USA. “Highway Robbery is yet another way we are able to showcase our thinking not just about our cars, but how they can affect the world around them. We’re posing big questions as we seek out new, fresh ways about how and where we can enable the future of driving.”