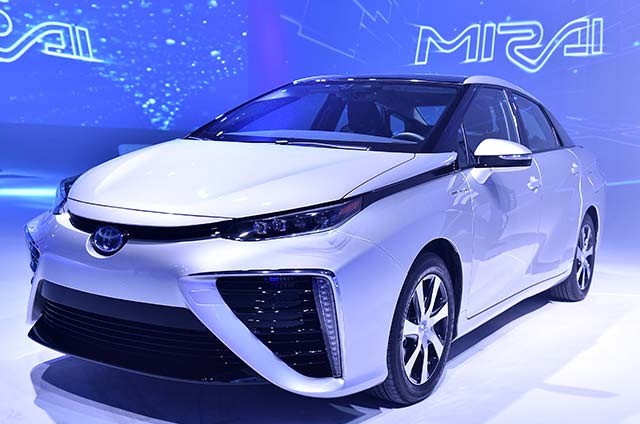 The Toyota MIRAI was declared the 2016 World Green Car at a press conference hosted by the New York Auto Show, Bridgestone Corporation, and Autoneum.

The Toyota MIRAI was chosen from an initial entry list of eight new vehicles from all over the world, then a short list of three finalists that included the winner as well as the Chevrolet Volt and the Toyota Prius Hybrid.

Toyota Motor Corporation is no stranger to the World Car Awards program – now in its 12th year.  The Toyota Prius (2010) has previously earned “Top Three in the World” status for both the World Green Car and the overall World Car of the Year categories as voted by our 70 plus international automotive journalists that make up the jury. In addition, the Toyota GT86 was a “Top Three in the World” finalist for World Car of the Year in 2013; the Toyota iQ in 2009 for the same category; and the Toyota Harrier Hybrid in 2006 for World Green Car.

“Just as Prius changed the world nearly 20 years ago, the hydrogen‐powered Mirai is ready to make history,” said Bill Fay, group vice president and general manager, Toyota Division.  “With a range of over 300 miles per tank, a refueling time of under five minutes, and emissions that consist only of water vapor, Mirai is leading the world forward toward a more sustainable future.”

To be eligible for the 2016 World Green Car award, a vehicle had to be all‐new, or substantially revised, in production and introduced for sale or lease to the public in quantities of at least 10 in at least one major market during the period beginning January 1, 2015 and ending May 31, 2016. Tailpipe emissions, fuel consumption, and use of a major advanced power plant technology (beyond engine componentry), aimed specifically at increasing the vehicle’s environmental responsibility, were all taken into consideration.

The Road to World Car began in Frankfurt on September 15, was followed by a four and a half day stop in Los Angeles for test‐drives of the North American, Japanese and Swedish contenders in November, continued in Geneva with the Top Three in the World announcement, and finally ended today with the declaration of the winners in five categories at the New York International Auto Show.

2016 marks the 10th anniversary of the partnership between World Car and the New York show, and the third consecutive year that the World Car Awards have retained their ranking as the number one automotive awards program in the world in terms of media reach.