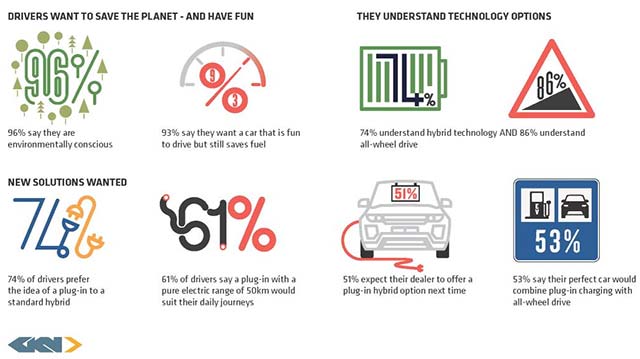 Drivers now consider plug-in hybrid vehicles to be more attractive and practical than conventional hybrids, a survey commissioned by GKN Driveline has revealed.

The poll of motorists showed that 75% preferred the idea of plug-ins, with 61.2% agreeing that an electric range of 50km would meet their daily needs.

The independent online survey asked over 1,000 German motorists for their views on driveline technologies such as hybrids and all-wheel drive as well as issues ranging from the environment to their vehicle preferences. The survey found that although 96% of drivers say they are environmentally conscious to some degree, when it comes to cars, the environment takes a back seat to more practical considerations.

Around 81% say they are wary of hybrids, with 62.8% citing “poor value for money” as the main reason. Conversely, just 25% described all-wheel drive vehicles as “expensive” to purchase or run, with most associating the technology instead with off-road capability (73%), safety (37%) and higher performance (36%). These attitudes seem to translate into higher expectations at car dealerships. Around half of people (49%) expected their car dealership to offer a plug-in hybrid option and 52% agreed that their perfect car would combine plug-in charging with all-wheel drive.

GKN Automotive President of Engineering Peter Moelgg said: “Drivers are environmentally conscious and like technology to offer clear benefits. The challenge is introducing eco-friendly technologies that add real value for them. We believe that plug-in hybrids with all-wheel drive make sense – and the public’s positive response to vehicle programmes that offer this combination – like the Volvo XC90 T8 Twin Engine, BMW i8 and Porsche 918 Spyder – can only continue to grow.”

The survey also indicates that the factor most likely to persuade drivers to consider a plug-in hybrid was greater availability of charging points (52%), followed by tax incentives (45%). Performance improvements (33%) scored slightly higher than environmental concerns (32%).

The survey correlates with Germany’s current vehicle parc, with 2.3% of people using a hybrid as their main vehicle, 23.4% driving diesels and 72.6% driving gasoline. Just 0.3% of those surveyed currently drive a pure electric vehicle or plug-in hybrid.

Over a third (37%) of drivers still believe gasoline engines provide the best driving experience, hybrids came second in the poll with 13.5%, just beating diesels with 12.8%. Twice as many male drivers chose hybrids (17% compared to 9%). Twice as many women stated they were unsure (37% compared to 17%).

GKN has been pioneering the introduction of eAxle technology since 2002, launching the industry’s first eAxle applications with PSA Peugeot Citroen. The company was awarded Official Porsche Technology Partner status for its contribution to the plug-in hybrid Porsche 918 Spyder programme. It launched the world’s first two-speed eAxle in the plug-in hybrid BMW i8 and also supplies the eAxle on the Volvo XC90 T8 Twin Engine PHEV programme.