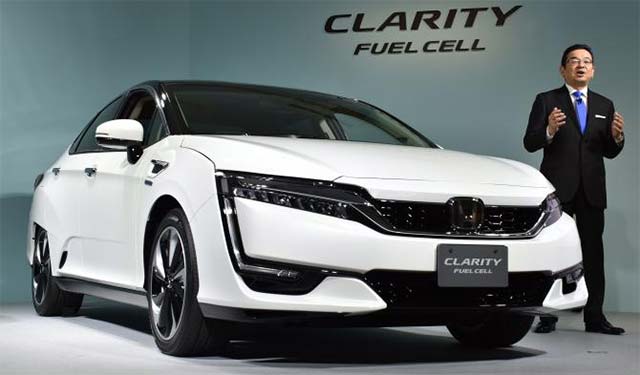 In an effort to realize the widespread popularization of FCVs, the Clarity Fuel Cell was developed as an FCV featuring both a high level of practicality that represents the “universal value” of an automobile and “cutting-edge appeal” that is suitable for a vehicle that is at the forefront of the times and went on sale on March 10, 2016.

Combined with the improved efficiency of the powertrain and a reduced energy requirement for driving, a 70 MPa high-pressure hydrogen storage tank installed to this vehicle provides a cruising range of approximately 750 km (466 miles), an increase of approximately 30% compared to the previous FCV model, to achieve the world’s top-class cruising range among all zero emission vehicles. The Clarity Fuel Cell has a longer range than the Toyota Mirai, the world’s first mass-produced hydrogen vehicle, which can cover around 650 km (373 miles).

The hydrogen tank can be refilled in approximately three minutes, realizing ease of use equivalent to that of a gasoline-powered vehicle.

Comments by Mr. Tsuyoshi Hoshino, Parliamentary Vice-Minister of Economy, Trade and Industry:
“When I got behind the wheel of the Clarity Fuel Cell for the first time today, I felt Honda’s strong passion toward the realization of a hydrogen society. For the popularization of FCVs and hydrogen stations, which will be the key to the realization of a hydrogen society, METI will continue to pursue the joint effort of the public-private partnership by facilitating closer collaboration with automakers such as Honda, along with hydrogen station operators and other stakeholders.”

Comments by Takahiro Hachigo,President, Chief Executive Officer and Representative Director of Honda Motor Co., Ltd.:
“It is our pleasure to deliver the first unit of our Clarity Fuel Cell to the METI as part of the integrated public and private efforts to realize a hydrogen society. Honda will contribute to the realization of this hydrogen society by further development of our technologies and offering highly attractive FCVs to our customers at more affordable prices.”