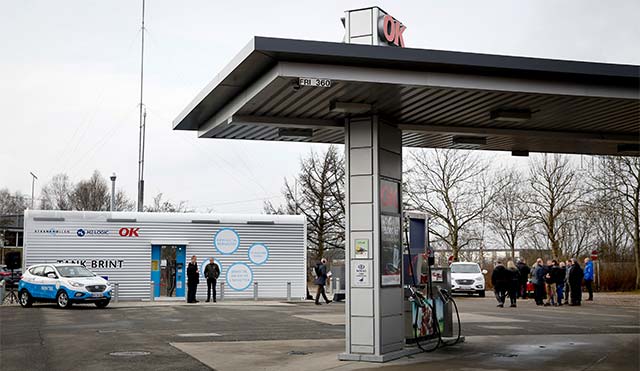 This narrows the driving distance to the nearest station in Hamburg, Germany to only 245km (150 miles) making cross-border driving on hydrogen even more comfortable.

The hydrogen station in Kolding will be used by a fleet of ix35 Fuel Cell vehicles from Hyundai delivered to various local users, among others the City of Kolding.

The station is placed at a conventional fuelling station operated by OK and located right next to the major highway connecting the southern part of Denmark with Germany.

Hydrogen for the Kolding station is delivered from a central electrolyser plant operated by Strandmøllen and based on technology from the H2 Logic sister company NEL-Hydrogen. The entire Danish hydrogen station network is based entirely on hydrogen produced from electrolysis and electricity procured with CO2 certificates. This ensures a 100% sustainable and zero emission hydrogen supply – the highest share in the world for an entire station network.

The Kolding station, as well as the remainder of the Danish network is based on H2Station technology from H2 Logic that provides 70MPa fast fuelling in accordance with international standards. H2Station technology has a long proven track-record of reliable operation and is used on a daily basis in several European countries.