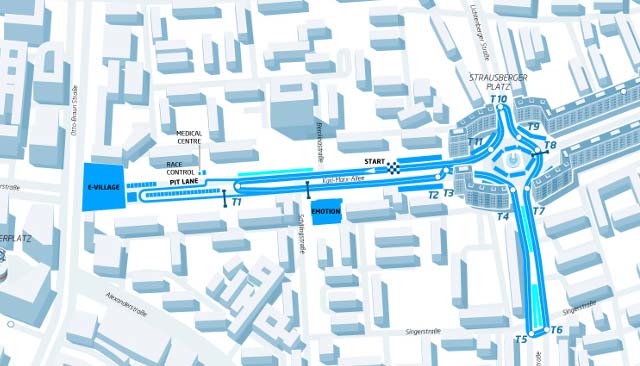 The Berlin ePrix will take place on a new bespoke track in the heart of the German capital on May 21.

The 2.030km circuit, which remains subject to approval from the Berlin city authorities, and FIA track homologation, will feature 11 turns and wind its way around Strausberger Platz and towards Alexanderplatz with the pitlane on Karl-Marx-Allee.

All relevant parties are working hard on the approval of the new location so the event will take place in Berlin in 2016.

Alejandro Agag, CEO of Formula E, said: “It is fantastic news that we have been able to find a new location to race in Berlin and I want to thank everybody who has been involved in making this happen for all their hard work in such a short space of time. Germany is an incredibly important market for Formula E as the home of DHL, the championship’s Official Logistics Partner, and BMW i, the Official Vehicle Partner of the series. I am sure that this race will capture the imagination of the German fans and be a great success.”

Jean Todt, President of the FIA, said: “The FIA Formula E Championship was created to promote the theme of a new form of sustainable mobility, alongside the development of technologies linked to an electrical powertrain; all this combining to bring a racing event into the heart of the great cities of the world. The new location for the Berlin ePrix fits these requirements perfectly. Berlin is one of the most important capital cities in the world, the cultural and political centre of Germany, a country where the motor industry plays a very important role and where there is a particularly keen awareness of mobility for the future. I am sure that Formula E Holdings, with the ever-valuable cooperation of the DMSB, will be able to put on a show for the spectators that is a match for the allure of a city like Berlin.”