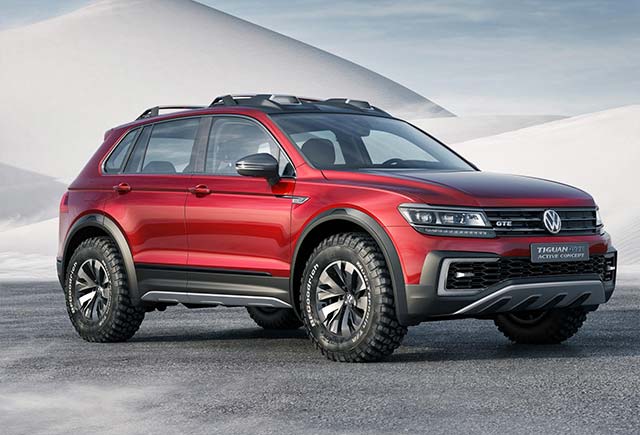 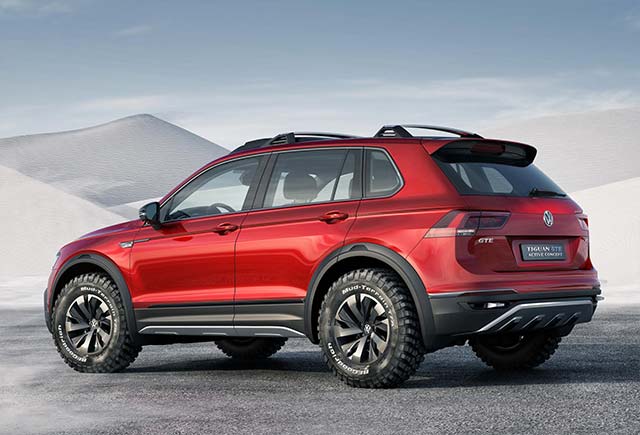 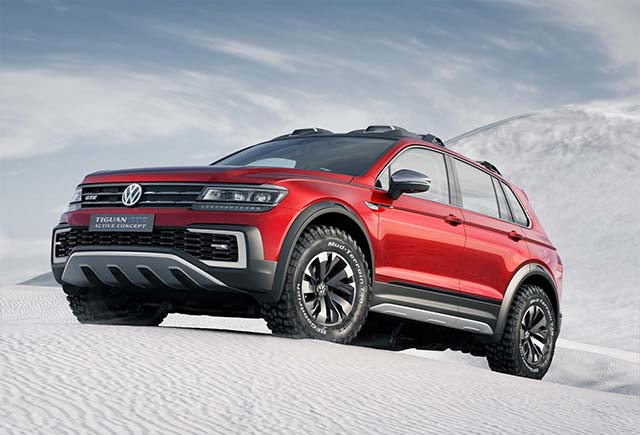 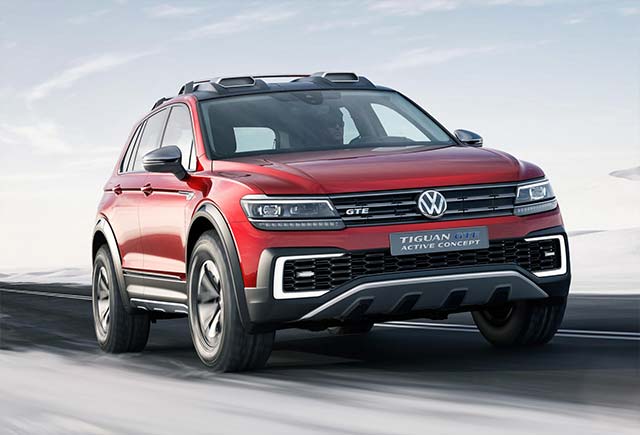 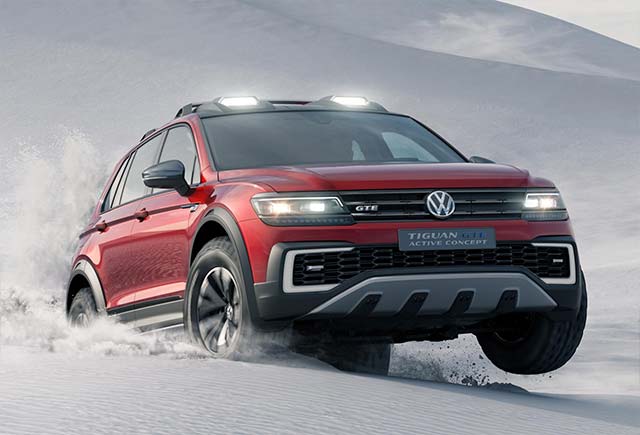 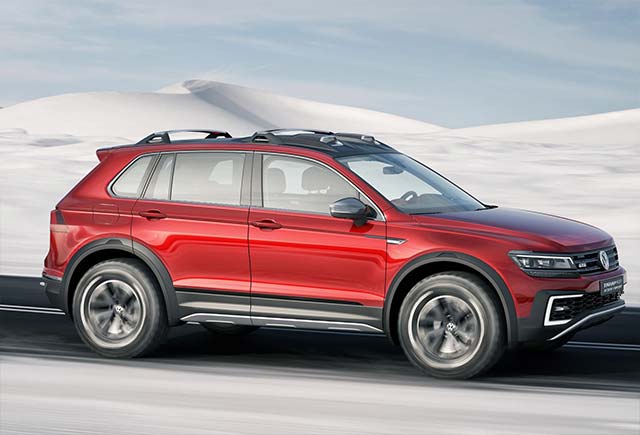 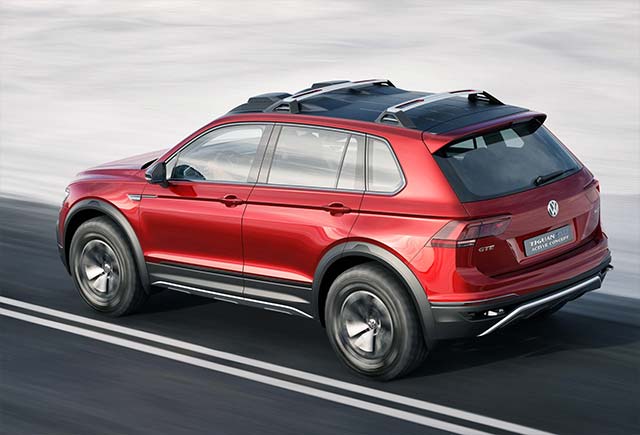 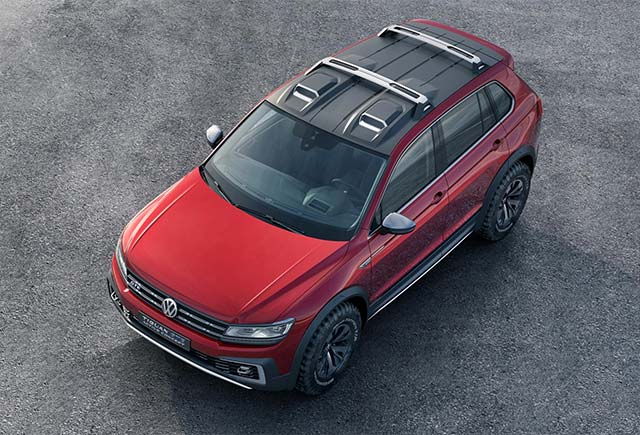 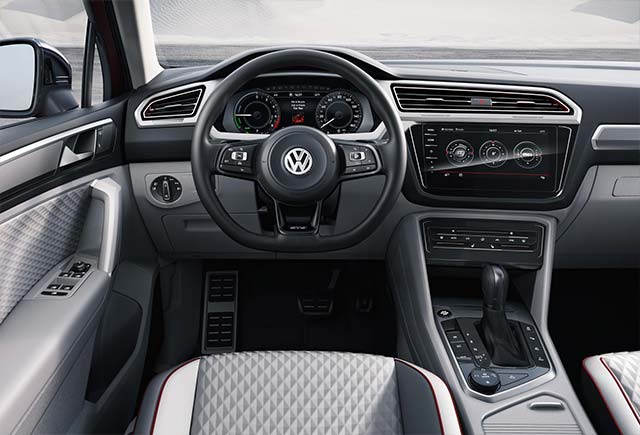 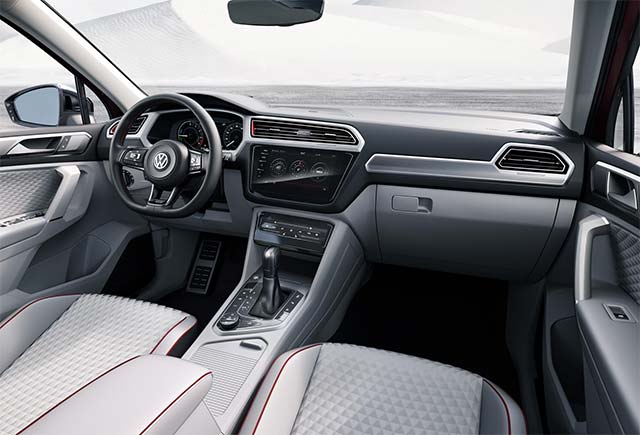 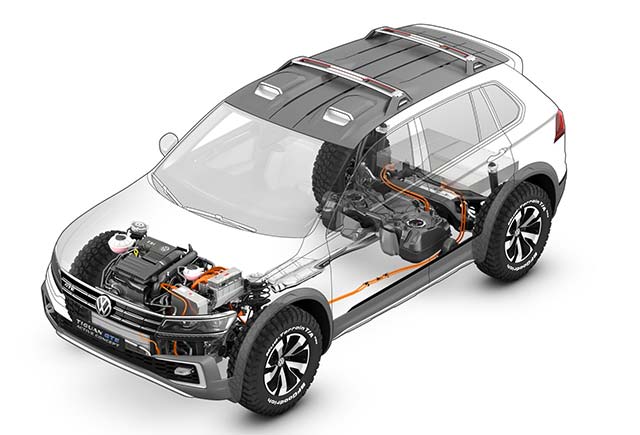 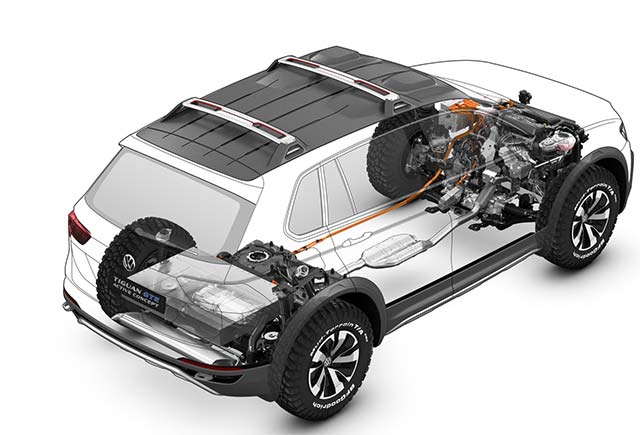 The Tiguan GTE’s most striking innovation is its efficient plug-in hybrid system that uses two electric motors and a gasoline engine, which can supply all four wheels with power, either automatically or at the push of a button. This concept proves how much potential plug-in hybrid systems have. The all-wheel-drive system’s technology ensures that this SUV can offer supreme off-road performance, even in all-electric mode.

The five-seat concept is based on the completely redeveloped second-generation Tiguan. The GTE Active Concept reflects the great technical versatility of the new SUV, which will arrive to the U.S. market in 2017 with a longer wheelbase and available seven-seat functionality. For Volkswagen, the new Tiguan marks the kickoff of an SUV product offensive that will significantly expand the range of vehicles offered, especially in North America.

The concept car starts every journey in all-electric E-mode as a zero emissions vehicle. Normally, the rear wheels are driven, but if there is loss of traction, the front wheels are engaged within fractions of a second. Four-wheel-drive is also activated when the driver selects 4MOTION Active Control or when GTE-mode is selected, for instance. The vehicle can cover up to 20 miles in all-electric mode. The driving range, based on a battery capacity of 12.4 kWh and a 16.9-gallon fuel tank, is 580 miles.

Volkswagen has configured the design, packaging and technical features of the SUV to be as innovative as its plug-in hybrid drive system. The Tiguan is the first SUV to be based on the Modular Transverse Matrix (MQB), and demonstrates intelligent space utilization. The GTE Active Concept projects an authentic off-road look and makes a powerful impression with its stylish, taut proportions.

Moreover, the Tiguan GTE Active Concept is also equipped with safety systems such as Front Assist with Autonomous Emergency Braking and pedestrian monitoring, an active hood for pedestrian protection, Lane Assist and the Automatic Post-Collision Braking System. Another highlight of the concept car is its infotainment system: the Tiguan GTE Active Concept features the top level of the latest generation infotainment systems and is equipped with a 9.2-inch touchscreen, gesture control (implemented for the first time in this class), an Active Info Display (fully digital instruments) and a head-up display.

Drivetrain
The Tiguan GTE Active Concept is equipped with a turbocharged and direct-injection TSI gasoline engine that produces 148 horsepower and 184 pound-feet of torque, mated to two electric motors. These make 54 hp at the front wheels and 114 hp at the rear. The total system power of 221 hp can supply all four wheels with propulsive force under off-road conditions and the 4MOTION all-wheel-drive system also boosts traction and contributes to active safety on normal pavement.

The Tiguan GTE Active Concept uses a 6-speed dual-clutch (DSG) automatic transmission that was specially designed for hybrid use, with the front electric motor being housed inside the casing. Other plug-in hybrid components of the 4MOTION plug-in hybrid drive include: a 12.4 kWh lithium-ion high-voltage battery that can be charged either externally or via the gasoline engine; power electronics for the front motor; a second module at the rear that converts the battery’s DC current into AC for the electric motors; and an on-board charger.

Depending on the driving mode, the Tiguan GTE Active Concept can be driven by the front, rear, or by all four wheels. As a default, the concept car always starts off in zero emissions E-mode. If the battery is sufficiently charged, the rear electric motor powers the car by itself, while the TSI engine and the front electric motor are decoupled from the drivetrain and shut off to save energy. However, as soon as the driving situation demands it, or the driver manually activates a related mode, the front electric motor is engaged within fractions of a second. This means the Tiguan GTE Active Concept is a zero-emissions all-wheel-drive vehicle that can cover up to 20 miles on battery power alone. In E-mode, the Tiguan has a top speed of 70 mph.

Next-generation infotainment system
The top level next-generation modular infotainment platform (MIB) is also featured on the Tiguan GTE Active Concept. Two exceptional features of this system are a large 9.2-inch high-resolution touchscreen (1,280 x 640 pixels) and gesture control functionality. All functions and displays utilize a sophisticated screen surface that is as clear as glass; facing the driver on the left are four sensor buttons (Menu, Home, On/Off and Volume). The 8.2-inch wide and 4.1-inch tall home screen consists of a large main window and two configurable tiles (positioned on the right side on the home screen), each of which is 1.7 inches tall and 2.3 inches wide. They can be filled with ten different types of content, such as Media (including song/album cover information) or Phone (including an image of the person to whom you are talking).

In addition, it is possible to use the entire surface of the home screen for one function—for example, to show the navigation map in large format, to show special instruments for the Off-road program (steering angle, compass, altitude indicator) or to show, via Car-Net App-Connect, the smartphone apps for Mirror Link, Android Auto or Apple CarPlay.