Piloted, Electrified And Fully Connected – Audi At The 2016 CES 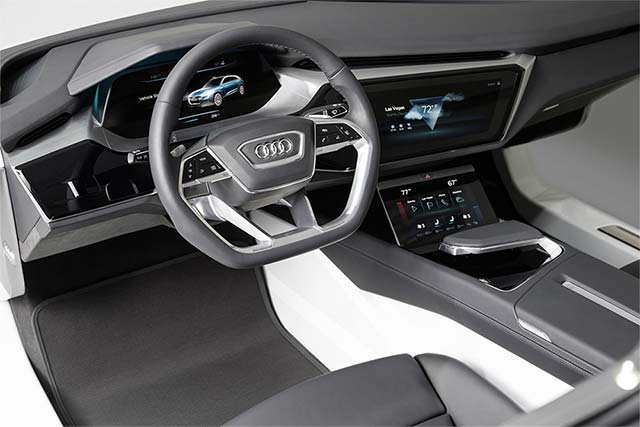 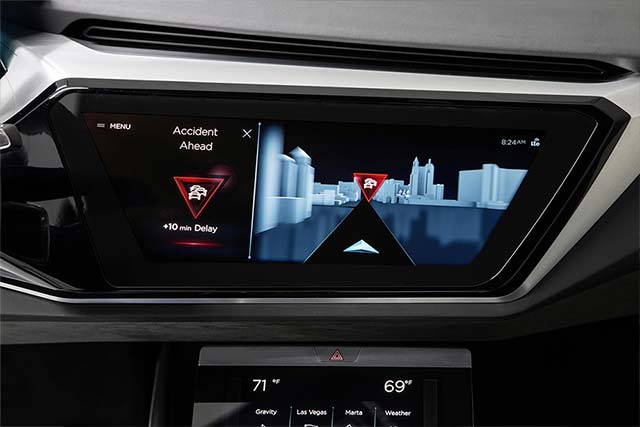 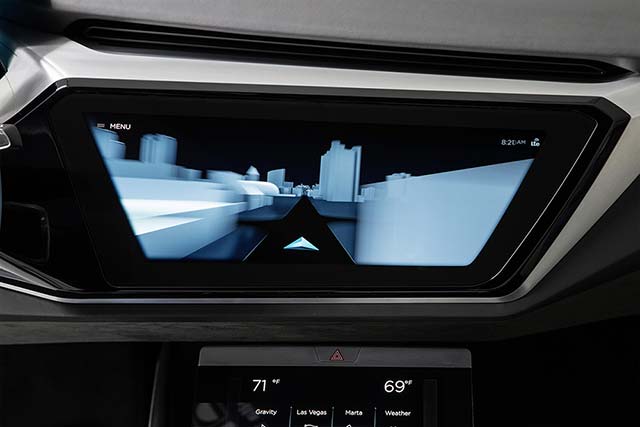 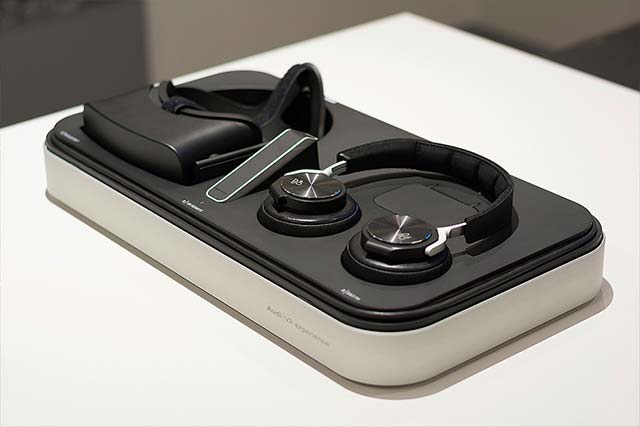 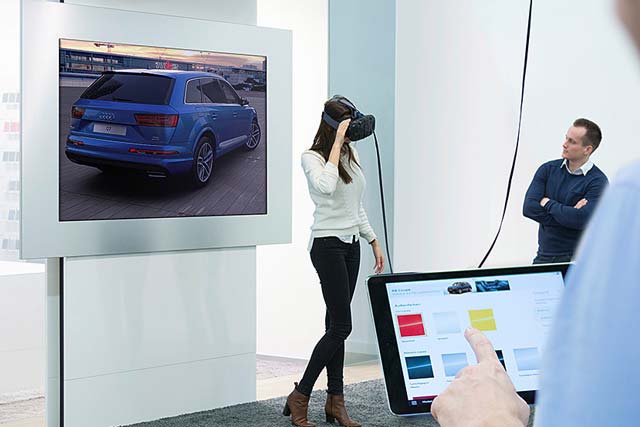 At the 2016 Consumer Electronics Show (CES), Audi is presenting its latest technologies in the form of attractive solutions for today and visionary ideas for tomorrow.

Audi electrification strategy
The Audi e-tron quattro concept, the brand’s conceptual study at CES, is an all electrically powered sport SUV. Three electric motors with a total output of up to 370 kW enable a quattro drive system and electric torque vectoring for maximum dynamic performance and stability. The 95 kWh battery, located between the axles and therefore in an ideal position in terms of the centre of gravity, enables a range of over 310 miles. The Audi e-tron quattro concept car is a preview of a future production model that will arrive on the market in 2018.

Piloted driving
The Audi e-tron quattro concept has piloted driving technologies on board, which Audi will be launching into production in the near future. They include piloted driving in traffic jams and piloted parking. These services  represent greater safety, time savings, efficiency, comfort and convenience. The systems can make a valuable contribution toward safety, especially in situations in which the driver is either overwhelmed or underwhelmed by driving tasks. The core component of future systems will be the central driver assistance controller, known as the zFAS. Information is continually acquired from all of the car’s sensors and processed in this compact module. They include signals from the 3D cameras, the laser scanner and radar and ultrasonic sensors. The high computing power of the zFAS gives it the ability to continually compare the data of vehicle sensors to the environmental model of the road.

Especially in this area, Audi will benefit from the highly up-to-date HERE maps database, which AUDI AG acquired together with the BMW Group and Daimler AG in December 2015. In the future, self-driving vehicles will need to be based on a new data source with centimetre accuracy. The live data approach of HERE makes it possible to evaluate all sorts of changes and movements and recognise potential hazards in an extremely short time. In addition, vehicle sensors will send anonymised feedback to the cloud in real time – not only about the current traffic situation, but also about changes, e.g. related to the road condition, detours or other disturbances. In addition, HERE serves as a database with information on hotels and businesses, parking places and events. This is an example of how Audi is generating swarm intelligence with a high level of relevance.

New approaches: controls and displays
User-friendly operation is an Audi strength, and now the brand with the four rings is expanding its operating and display concept (HMI, human-machine interface) with new solutions. The concept is being presented in an interior mock-up of the Audi e-tron quattro concept car. The curved OLED (OLED: Organic Light Emitting Diodes) of the new Audi virtual cockpit lies in the driver’s immediate visual field.

The AMOLED (AMOLED: Active Matrix Organic Light Emitting Diodes) technology that is used offers new creative freedoms in designing display shapes. The two displays of the Audi MMI on the centre console offer an outlook on the digital future. Key functions can also be controlled conveniently by voice. Both displays exploit the advantages of a new type of touch recognition – what is known as Audi MMI touch response. Here, the selected functions are activated by gentle yet defined pressure on the display. This makes it possible to operate the system safely and with few distractions while driving.

Behind the new operating and display concept is the latest extension stage of the Audi Modular Infotainment Platform, MIB2+. Its further boosted computing power makes it possible to drive several high-resolution displays.

MIB2+ has been prepared for the latest mobile communications standard: LTE Advanced. It can download data into the car at a maximum speed of 300 Mbit/s. LTE Advanced also enables mobile telephony using the VoLTE (VoLTE = Voice over LTE) method, which shortens the time needed to make a phone connection and increases voice quality. Voice control has also become more powerful – it utilises both the on-board address book and a server in the cloud.

The control and display concepts from Audi are already visionary today. The Audi virtual cockpit – a fully digital instrument cluster with a 12.3-inch TFT display – provides all information in intricately calculated and brilliant 3D graphics, in which drivers can choose between different views. The latest Audi models have MMI terminals on board that follow a new operating logic. This resembles the concept that is familiar from modern smartphones – flat hierarchies instead of complex menu trees. Voice control is available as an alternative.

Audi connect
The term Audi connect covers all applications and developments that network an Audi with its owner, the Internet, infrastructure and other vehicles. Audi continues to extend its lead in this technology field. An LTE/UMTS module of Audi connect connects to the Internet with download speeds of up to 100 MBit/s.

The integrated Wi-Fi hotspot lets passengers freely surf the web, stream and text/e-mail with up to eight mobile devices. Customised services from the Audi connect portfolio are delivered to the car for the driver. They include traffic information online, Google Earth and Google Street View, parking information, fuel prices and flight, train and gate information. The Audi connect lineup is rounded out by City Events, individually configurable news, travel and weather information and other services.

Audi will also be offering additional new services in Europe, and soon in the USA.

They include emergency call that alerts the Audi Emergency Call Centre after an accident, online roadside assistance that calls the Audi Service Centre and Audi service request with which customers can schedule a service appointment.

The free Audi MMI connect app brings more services into the car such as Online Media Streaming, which offers access to the services of the subscription music portals Napster and Rhapsody and the Aupeo! radio service. For owners of the new A4 and Q7 models, the Audi MMI connect app also offers remote vehicle services. From a smartphone, they can lock or unlock the doors or view the latest car status report. They can also have the parking location and parking time displayed. Other functions have been added for the Audi e‑tron models – remote control of battery charging and climate control and access to driving data. The app’s remote functions can also be activated by a smartwatch, and effective at the beginning of 2016 by a fourth-generation Apple TV.

In just a few months, the Audi connect SIM will be available for the new A4 and Q7 models in European markets. It is a permanently installed embedded SIM (e-SIM) that automatically brings Audi connect services into the car across Europe and does not require that the driver perform an activation procedure.

It permits EU-wide roaming, because the SIM card can be automatically set to specific country providers as necessary. This eliminates country-specific roaming fees and annoying roaming confirmations.

Regardless of which connect services are integrated, Audi owners can choose additional data packages for the Audi connect SIM at economical rates to operate the Wi-Fi hotspot. Here too, the data transfer automatically continues at the fixed price when crossing a border, i.e. when switching providers.

In 2016, Audi is expanding its connect lineup to include the first Car-to-X technologies. The services traffic sign information and hazard information make the new Audi models part of a swarm. They report detected speed limits and hazardous locations, e.g. at points where a vehicle has broken down or the road service is slippery, to a server in the cloud via the mobile phone network. The server collects the data, processes it, and provides it to other Audi drivers who have suitable equipment. The updated information also flows into regular map updates for the MMI navigation plus system, making it available to the entire Audi fleet.

The traffic light information service connects the new models in the USA via the mobile phone network to the central traffic computer that controls traffic lights in the city. Based on the information from this system, the Audi virtual cockpit recommends a speed to the driver for reaching the next traffic light while it is green.

Lighting innovations at Audi
The company is driving progress in automotive lighting technology. The latest highlights are matrix OLED technology and matrix laser technology which will soon be introduced to production.

OLED lighting units are moving into a new dimension with their precision and homogeneity. As a flat light source, they are excellently suited for use in tail lights. Subdivided into small segments that can be driven with high variability, they enable new, dynamic lighting scenarios – OLED technology will become matrix OLED technology at Audi.

Matrix laser headlights illuminate the road with a new standard of precision. Distributed into many tiny pixels, its light beam can be dispersed with extremely fine control. The new technology lets the car generate the ideal light for each driving situation. Matrix laser headlights offer tremendous gains in safety for the driver and all other road users.

Audi Fit Driver
The Audi Fit Driver project is focusing on the well-being of the driver. Audi has a vision of drivers who step out of their cars at their destinations feeling more relaxed than when they stepped into them. A wearable – a fitness wristband or watch – monitors important vital parameters such as heart rate and skin temperature. The car’s sensors supplement them with information on driving style, breathing rate and relevant environmental data such as the weather or traffic situation. By analysing the combination of this data, the car can deduce the current state of the driver, e.g. whether the driver is stressed or overly tired. The vehicle systems then adjust their modes of operation to relax, vitalise, or even protect the driver.

In a later extension phase, Audi Fit Driver will also incorporate driver assistance and safety systems as well as systems for piloted driving – with functions that extend all the way to piloted emergency stops with emergency calling. When it comes to data protection, the usual strict regulations by Audi apply.

One of the infotainment components in production today is the Audi phone box. It lets users charge their mobile phones inductively based on the Qi standard, and it improves mobile phone reception.

The component lineup is rounded out by 3D sound systems from Bose and Bang & Olufsen as well as the Audi smartphone interface and the Audi tablet.

Three production models will also be on display at the CES: the Audi Q7 SUV, the all-new Audi A4 and the 610 PS Audi R8 V10 plus.