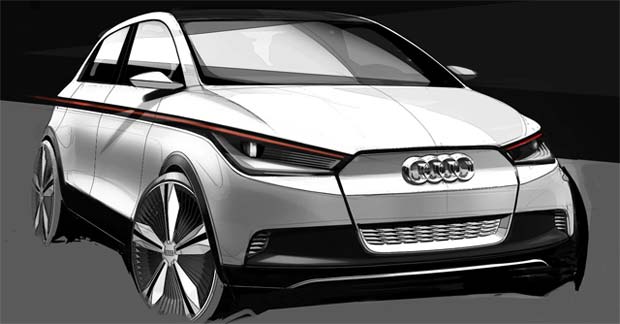 Audi is offering another glimpse into the future of mobility at the 2011 Frankfurt Motor Show with the Audi A2 concept – a compact technical study with electric drive that offers plenty of room for four people.

The Audi A2 concept is 3.80 meters long, 1.69 meters wide and 1.49 meters high, yet it manages to make a powerful impression on the street. Its clean appearance concentrates on the essentials; all details are subtle but shaped for visual impact. The dark glass roof of the white-painted show car switches to transparency at the touch of a button.

With its headlights, Audi is presenting the next phase in LED technology, known as matrix beam. A package of LEDs and microreflectors generate a high-resolution and non-glaring high-beam light. Delicate daytime running light fibres frame the highly efficient LED low-beam light module. Intelligent tail lights adapt their illumination to the visibility conditions. The rear fog light, produced by laser diodes, is seen as a beam of light in fog and projects a red triangle onto the road as a warning.

In addition, a red bar of light flows forward from the tail lights when braking and demonstrates the strength of the brakes intuitively for other road users.

The dynamic light is also located in the cockpit area of the show car, structured in two separate arches. Like the entire interior, the dash panel has a light and clean look and intuitive controls. The driver manages many important features via touch-control areas on the inside of the steering wheel. Two additional control surfaces fold up at the driver’s right when starting the vehicle. An open profile serves as the steering column; a seven-inch display and two secondary displays are located at its end.

The Audi A2 concept has a flat interior floorboard. The centre console is attached to the driver’s seat; the rear console extends forward between the two rear seats. The four individual seats add lightness, and there is storage space under the fold-up seat cushions. There is room between the rear seats for a city bicycle with its front wheel removed. The load area has two levels; a frame with functional nets creates the upper level.

The colors and materials in the interior support the impression of lightness and functionality. The large areas from the door top shoulders to the floor bear a new and innovative covering material made of polyurethane with a neoprene surface feel; a ribbed material made from recycled polyester covers the central floor area. The seat shells are made with a plastic blow moulding technique. Aluminum trim elements create highlights in the cockpit.

Look for reviews and live photos with ElectricCarsReport’s Frankfurt Motor Show coverage and become our fan on Facebook.[wzslider height=”400″ lightbox=”true”]