Charging An Electric Car In 15 Minutes 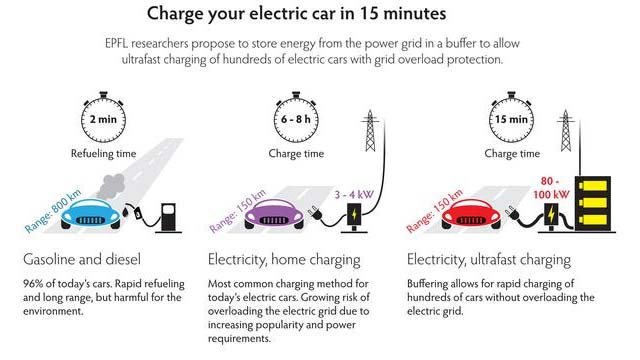 Electric cars will only be truly competitive when it doesn’t take longer to charge them than it does to fill a gas tank. The storage capacity of batteries is improving exponentially, but the power grid is the weak link: how could it possibly charge thousands of cars at the same time?

This is especially problematic in the case of ultra-fast charging, which requires more than 10 times more power. Ecole Polytechnique Federale de Lausanne (EPFL) researchers have found the solution: intermediate storage.

It only takes a minute and a half to put enough fuel into the tank of a diesel car to run for around 1,000 kilometers. After being charged for the same amount of time, the best electric cars will only go six kilometers. The only way to make the charging process faster is to increase the power flow going in. But such a quick charge would require 4.5 MW of power – equivalent to 4,500 washing machines. This would bring down the power grid.

Low or medium voltage
“We came up with a system of intermediate storage,” said Alfred Rufer, a researcher in EPFL’s Industrial Electronics Lab. “With this buffer storage, charging stations can be disconnected from the grid while still providing a high charge level for cars.” And this can be done using the low-voltage grid (used for residential electricity needs) or the medium-voltage grid (used for regional power distribution), which significantly reduces the required investment.

Intermediate storage is achieved using a lithium iron battery the size of a shipping container, which is constantly charging at a low level of power from the grid. When a car needs a quick charge, the buffer battery promptly transfers the stored electricity to the vehicle. The grid is not even used.

To prove the system works, the researchers at the EPFL Energy Center and Industrial Electronics Lab built a demonstrator together with their partners from the Swiss Federal Laboratories for Materials Science and Technology (EMPA), the Swiss Federal Institute of Technology in Zurich (ETHZ) and the Bern University of Applied Sciences. The demonstrator is a trailer holding the intermediate storage battery. It draws power from the low-voltage grid and, in the space of 15 minutes, provides the 20 to 30 kWh needed to charge a standard electric car battery. “Our aim was to get under the psychological threshold of a half hour. But there is room for improvement,” said Massimiliano Capezzali, deputy director of the Energy Center, who coordinated the project.

Determining the capacity of tomorrow’s charging stations
What is also interesting about this concept is that it can be used to determine how much capacity future charging stations will need. Gas stations from the last century will gradually give way to electric charging stations. And just as owners had to assess how big their fuel tanks needed to be, future suppliers of electric energy will have to estimate the needed capacity for their buffer storage. To help them in their task, the researchers developed an equation that factors in a number of parameters, including traffic statistics on a given stretch of road, the estimated number of electric cars, the charging capacity of the batteries, users’ charging needs, and so on.

The simulations, which are based on actual figures from French-speaking Switzerland, show that the scenario is entirely realistic. A station able to quickly charge 200 cars per day would need intermediate storage capacity of 2.2 MWh. This is the same order of magnitude as the energy consumed by one home in one year. In volume terms, it corresponds roughly to four shipping containers. “Electric cars will change our habits. It’s clear that, in the future, several types of charging systems – such as slow charging at home and ultra-fast charging for long-distance travel – will co-exist,” said Dr. Capezzali.