Tesla to double number of Superchargers in 2017 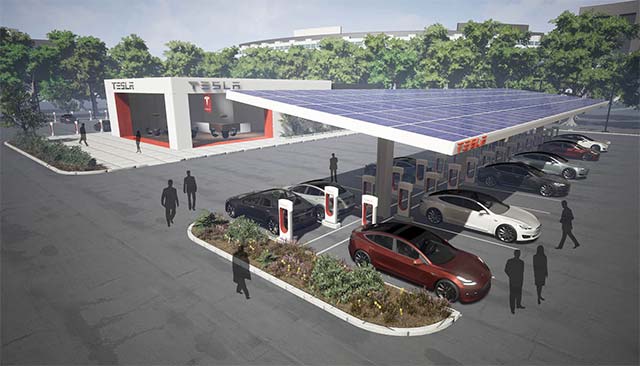 As Tesla prepares for their first mass-market electric vehicle and continues to increase the Model S and Model X fleet, the Palo Alto-based carmaker is making charging an even greater priority.

In 2017, Tesla will be doubling their Supercharger charging network, expanding existing sites so drivers never wait to charge, and broadening the charging locations within city centers.

As always, the most convenient way to charge is to plug in overnight where you park. However, to better serve the needs of owners who are traveling or those who don’t have access to reliable home charging, Tesla said it will continue to aggressively expand their public charging networks.

Since they first energized the Supercharger network in 2012, Tesla has built over 5,400 Superchargers with the goal of enabling convenient long distance travel for more than 200,000 Tesla owners around the world. In parallel, they’ve built a network of more than 9,000 Destination Charging connectors that replicate the convenience of home charging by providing hotels, resorts, and restaurants with Tesla Wall Connectors.

Tesla started 2017 with over 5,000 Superchargers globally and by the end of this year, Tesla will double that number to total more than 10,000 Superchargers and 15,000 Destination Charging connectors around the world.

In North America, Tesla will increase the number of Superchargers by 150 percent, and in California alone they’ll add more than 1,000 Superchargers. Tesla is moving full speed on site selection and many sites will soon enter construction to open in advance of the summer travel season.

Toward that goal, Tesla will build larger sites along their busiest travel routes that will accommodate several dozen Teslas Supercharging simultaneously. In addition, many sites will be built further off the highway to allow local Tesla drivers to charge quickly when needed, with the goal of making charging ubiquitous in urban centers.