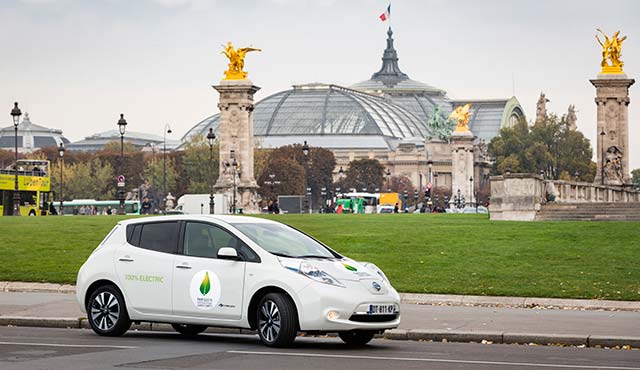 Electric vehicles from the Renault-Nissan Alliance shuttled more than 8,000 VIP delegates, media and negotiators and traveled at least 110,000 miles during the Paris climate talks — without emitting any CO2 tailpipe emissions and without using any petroleum whatsoever.

The fleet of 200 electric vehicles, which transported delegates during the two-week United Nations annual climate change conference in Paris, saved nearly 182 barrels of oil or 18 tons of CO2 not emitted while driving.

The Renault-Nissan Alliance was the official passenger-car shuttle provider for COP21, which ran from Nov. 30 through Dec. 11. The Alliance EV fleet was the world’s largest electric-vehicle fleet ever provided to an international conference.

The EVs made more than 3,800 transfers shuttling accredited delegates to and from hotels to the Bourget conference venue north of Paris. The fleet featured the Renault ZOE subcompact car, the Nissan LEAF compact car and the 7-seater Nissan e-NV200 van. Renault and Nissan employees volunteered as drivers and electric vehicle ambassadors for the cars, which were available to COP21 delegates as a complement to public transportation.

COP21 marked the first time the U.N. used a 100% electric fleet for its entire passenger-car shuttle at a climate summit. COP21 also resulted in the Paris Declaration on Electro-Mobility and Climate Change Call for Action, an agreement that aims to increase EVs and their charging infrastructure. The Renault-Nissan Alliance signed the action plan, which aims to keep the transport sector in line with the COP21 promise to reduce the impact of climate change.

Quick charge stations available for public use
The Renault-Nissan Alliance set up network of 90 quick and standard charging stations in strategic locations to recharge the cars. The stations were powered by low-carbon electricity provided by French electric utility company EDF. The residual emissions were offset under an accredited U.N. carbon offsetting program.

Thirteen of the 27 quick and semi quick chargers installed will remain and are available for the public to use. These include two quick chargers at Charles de Gaulle Airport, two on the principal highway surrounding Paris, and one at Orly Airport. The quick charging stations are able to charge an EV from 0 to 80% capacity in about 30 minutes.

The Renault-Nissan Alliance is the global leader in zero-emission vehicles, accounting for half of all EVs on the road today. Together, Renault and Nissan have sold more than 280,000 electric vehicles since the Alliance’s first electric vehicle Nissan LEAF went on sale in late 2010.

Dec 16, 2015Blagojce Krivevski
Hyundai IONIQ Gets Green StylingRinspeed Etos Is a Self-driving BMW i8 with Its Own Drone [video]