Renault and Eneco Collaborate on Smart Charging Solution for EVs 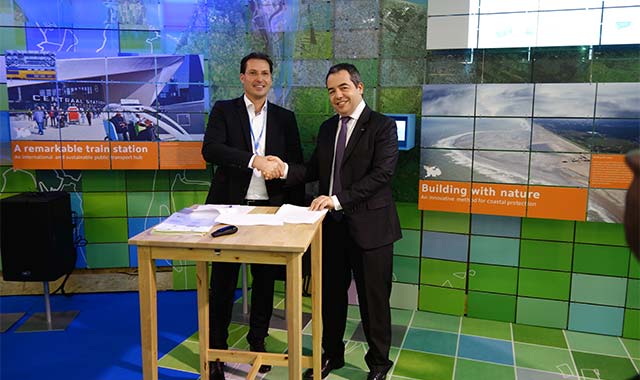 Renault and energy supplier Eneco have signed an agreement to collaborate on smart charging solution for electric vehicles at COP21 Paris conference.

Eneco subsidiary Jedlix will develop a version of its existing smart charging app, to adapt it to Renault ZOE. This app makes it possible to charge electric cars using renewable energy at times when the market prices are most favourable. Like at night, when the production of sustainable wind energy exceeds demand in most European countries.

A pilot test carried out by Eneco in the Netherlands demonstrates that users can save up to 15% on their electricity costs by using the app. To achieve this, all they have to do is indicate by what time the car must be fully charged and the system will automatically determine the lowest price within this time frame. Van der Linden: “I am very proud that we will be launching this smart service together with a leading party in the field of electric transport.” The app will first be available for ZOE users in the Netherlands and soon be available in other countries where Eneco operates.

Marc van der Linden, member of the Executive Board of Eneco:
“It is expected that there will be three million electric vehicles in the whole of Europe by 2020. To reduce CO2 emissions, it is essential that this vehicle fleet will use green power. It is also important to prevent power grid overloads as a result of peaks in demand if all the cars would be charged at the same time. Our app forms a direct link between the electric vehicle and the supply of sustainably generated energy.  Consequently, the energy used for charging is more sustainable, energy supply and demand is balanced and the costs of driving an electric vehicle are reduced because users charge their cars at lower rates.”

Eric Feunteun, Electric Vehicle Program Director at Renault:
“Renault electric cars support the energy transition in the automotive industry as they contribute to the replacement of fossil fuels by renewable energies. With smart charging systems like the one developed by Eneco, Renault electric vehicles make a big contribution to power systems’ stability and reliability: EVs turn into an asset for the grid rather than create overload. They can store and use electricity when it is less carbon-dependent and cheapest for their owners. Our partnership with Eneco is a move towards making driving a Renault ZOE more interesting and affordable and will contribute to an electric vehicles’ scale up”.