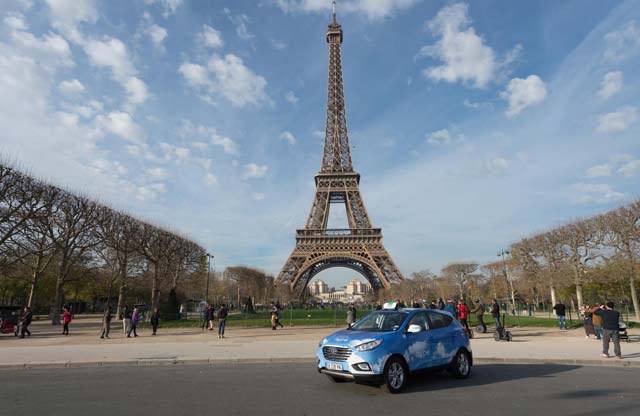 The handover coincides with the opening of the first hydrogen refuelling station in Paris, launched as the world focuses on COP21, the United Nations Climate Change Conference, held in the French capital.

The delivery of the five ix35 Fuel Cell makes the world’s largest fuel cell taxi fleet, and is the first step in establishing a hydrogen-powered electric taxi fleet called “hype” (Hydrogen Powered Electric), serving the Greater Paris area.The fleet is planned to increase up to several hundred vehicles within five years, with the refuelling infrastructure to be gradually installed in 2016, to meet the increasing demand for hydrogen.

Thomas A. Schmid, Chief Operating Officer at Hyundai Motor Europe, said: “With this pioneering project, Hyundai Motor and STEP are bringing new sustainable mobility to the streets of Paris. The ix35 Fuel Cell taxis will provide not only a clean solution for the city, but also a practical, comfortable and reliable choice for drivers and passengers.”

Compared to a diesel-powered taxi with CO2 emissions of 135g/km and an annual mileage of 100,000 kilometres, the ix35 Fuel Cell vehicles will save around 70 tonnes of CO2 per year in exhaust emissions. The only emissions from the tailpipe of the ix35 Fuel Cell during driving are water vapour.

The high-frequency usage of these cars on the ‘hype’ fleet will also showcase the reliability and all-day usability of fuel cell vehicles. To support this, Hyundai Motor will introduce and certify a specialised Hyundai fuel cell dealership, to service the growing taxi fleet.

With this latest delivery of fuel cell electric vehicles, the number of ix35 Fuel Cell on European roads has passed 250 units. The ix35 Fuel Cell was the first hydrogen-powered car to be mass-produced and offered for sale in Europe. The examples already on European roads have covered more than 1.2 million kilometres. By the end of 2015, the model will be available to buy or lease in 13 European countries.