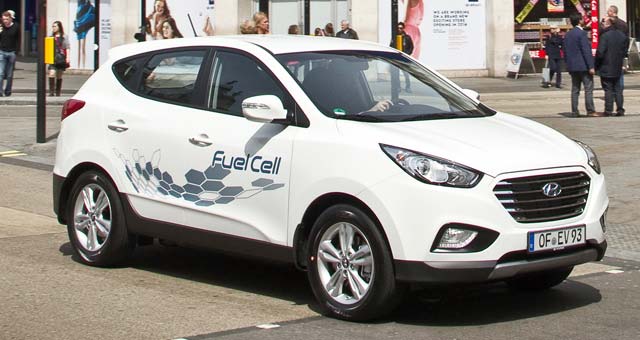 The Hyundai ix35 Fuel Cell has been awarded top place in the Design/Innovation category at this year’s Scottish Car of the Year awards.

The award was handed over to Robin Hayles, Hyundai UK’s Special Vehicles Manager, at a ceremony in Edinburgh on Friday 27th November.

Hyundai’s ix35 Fuel Cell vehicle was recognised thanks to its pioneering technology –the ix35 Fuel Cell was the world’s first commercially-available hydrogen-powered car. In 2015, ix35 Fuel Cell is now available and on the road in 17 countries across the globe including 13 in Europe.

This award win comes just days after Hyundai completed its world-first ‘A Streetcar Named Hyundai’ challenge, which saw one ix35 Fuel Cell drive over 2,000 miles of London streets. The end result was the single largest mosaic image, consisting of over 500,000 images – all while emitting zero harmful tailpipe emissions.

Alisdair Suttie, President, Association of Scottish Motoring Writers, commented: “The winner of our Design/Innovation category is from a manufacturer that’s renowned for its forward-thinking. What we particularly like about the Hyundai ix35 Fuel Cell is that it ‘normalises’ hydrogen power by using a bodystyle that happens to be the marque’s second best-seller in Scotland. Hyundai deserves credit for bringing a fuel cell car to UK roads to promote what’s increasingly looking like the best way to achieve zero emissions without limiting driving range.”

Robin Hayles, Special Vehicles Manager, Hyundai Motor UK, added: “Hyundai has been developing this technology since 1998, and in October 2014 we saw the arrival of the first mass-production fuel cell vehicles in the UK. Additionally, this year it officially became possible for both private and fleet customers to purchase one. With other OEMs starting to bring their fuel cell vehicles to market, you can expect to see many more hydrogen-powered cars on the road in the not-too-distant future.”