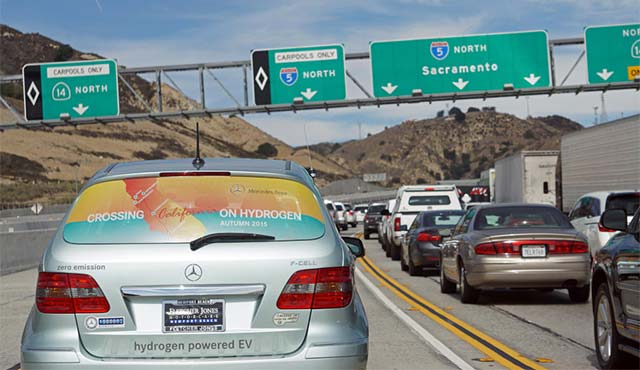 Mercedes-Benz B-Class F-CELL customers ventured beyond Southern California last week for the very first time, while only filling up at existing public hydrogen stations along the route from Los Angeles to San Francisco.

The opening of a new hydrogen station in Coalinga along the I-5 corridor made this opportunity possible. A team driving five B-Class F-CELL refilled at four permanent hydrogen fueling stations located in Burbank, Coalinga, West Sacramento and Emeryville, accumulating nearly 1,000 miles over the course of their three day trip.

Three F-CELL customers were accompanied by a team from Mercedes-Benz Research and Development North America based in Long Beach. The purpose of this unique road trip was to highlight the growing hydrogen station network and to show that the vision of the California Hydrogen Highway is becoming reality.

Early adopter Loki Efaw who has been an F-CELL driver since 2011 believes fuel cells are the future: “I don’t want a car that only takes me to work and back before I have to plug it in. I want a car that I can drive and drive. And the refuelling only takes a few minutes. That’s how it should be, and that’s why a successive build-up of hydrogen stations is absolutely necessary. This trip is the evidence.”

The electric power driving the Mercedes-Benz B-Class F-CELL is generated directly on board in the fuel cell stack by a reaction between the oxygen in the air and hydrogen. There is no emission of pollutants, only pure water vapour. Thanks to the 700-bar high-pressure fuel tank system, the car has a long operating range of around 250 miles (400 kilometers) and can be refuelled in the short time of less than three minutes.

The car combines local emission-free mobility with long-distance and day-to-day suitability and good performance figures. Produced under series production conditions, the Mercedes-Benz B-Class F-CELL has already been in day-to-day use with customers in the European and American markets since 2010. The total mileage of the Daimler fuel cell fleet, which now numbers more than 300 vehicles including numerous research vehicles, has now reached more than 7.4 million miles (twelve million kilometers).

Numbering around 70 vehicles, the F-CELL fleet in the USA has now covered about 2 million miles (3.2 million kilometers).

The development of the new generation Mercedes-Benz fuel cell electric vehicle is on track and the company plans to launch the model by 2017.