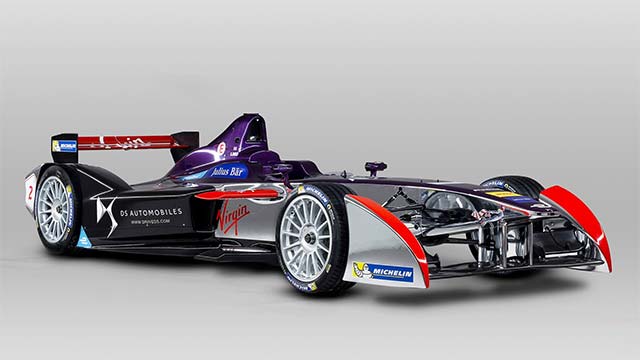 DS Virgin Racing has revealed its striking new livery for its DSV-01 electric racer, ahead of the first race of the second FIA Formula E season.

DS Virgin drivers Sam Bird and Jean-Eric Vergne will showcase the car for the first time at the final pre-season testing dates on 24 and 25 August 2015 at Donington Park.

Combining DS and Virgin brand identities, the new design represents a dynamic integration of both the DS Automobiles and Virgin colour schemes. Maintaining the distinctive red and chrome features from season one, the DS brand logo now appears proudly on each side of the car on a black background, whilst the battery cover will remain purple as in season one.

Carrying on from the inaugural season of Formula E, both Sam Bird and Jean-Eric Vergne’s cars will be named after Holly and Bellie Branson, featuring the ‘flying lady’ graphic as traditionally used across Virgin’s technological projects.

To mark the launch of the new livery, DS Virgin Racing has released a video, filmed in a dimly lit warehouse at Donington Park circuit. Featuring British driver Sam Bird, the video tells the story of how the car’s livery has evolved from last season.