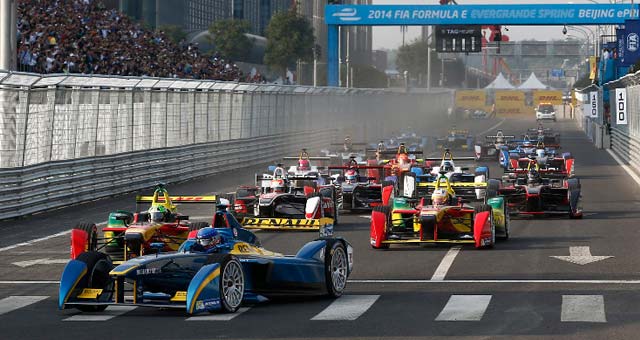 Next season, Formula E gets technical. All that the 2014/15 campaign gave us was sublime racing on cool street circuits with a title battle – between some of the top racers in the world – that went down to the final corner of the final race.

For season two, though, the work properly begins. From its inception, the entire remit of this series was to encourage electric vehicle technology development, as a result in season two teams can manufacturer their own electric motors. The Williams designed battery from the first season remains and cannot be touched, but the motor itself – along with inverter/ECU and gearbox – has been redesigned by eight manufacturers. With the same available energy and power, what will be crucial is creating the most efficient e-motor.

With testing at Donington Park a matter of weeks away, how is each team faring in the run up to the new season on October 17th in Beijing…

Team Aguri
Team Aguri, as it will be known after the split with Amlin, is the only team running season one tech this year. It’s decided that there is more potential in the McLaren motor than has been exploited this year, and that sticking with what you know may be more beneficial while the other teams struggle with expensive new technology teething problems. Like all gambles, it could go either way for Aguri. Reliability could put it in a strong position in every race, or it could get left behind by the technological development. As far as drivers go, nothing has been confirmed, but after his performances last season expect the team to be after Antonio Felix da Costa again. Former McLaren F1 driver Pedro de la Rosa has also tested for the team at Donington Park.

Andretti
Andretti has set up an entirely new enterprise, to focus on season two. Andretti Technologies will be creating the new electric motor, partnering with global technology company TE Connectivity. TE has huge experience in electronics in almost any field imaginable, from aerospace and defence, to subsea communications. Combining Andretti’s racing knowledge with TE’s electric experience seems to be a very good match. No drivers have yet been announced at Andretti, but hopefully some of the talent that passed through the American team’s revolving door last season will stick around in season two.

ABT Schaeffler Audi Sport
Like Andretti, ABT has also partnered with a technology group, Schaeffler. This relationship has been ongoing since the start of the season, and gave the originally all red ABT car its yellow and green flashes. Schaeffler’s main customer is the automotive industry, and – according to their website – ‘offers expertise for the entire drivetrain’. Pretty useful. The project is solely undertaken by Schaeffler and ABT, while Audi provides support. They let factory driver Lucas di Grassi race for the team, support the ABT team with a network of suppliers, and also allow the Formula E car to test at the new Audi test facility in Neuburg, near Ingolstadt. The team has been testing its new car at various circuits already, with the same drivers signed up for season two, and a new livery due to be launched at the final Donington test.

NEXTEV TCR
NEXTEV (read it as Next EV) is a Chinese electric vehicle technology firm, who partnered with Team China very early in the season. It was at Long Beach – where Piquet took his first victory – that we first saw the NEXTEV silver and yellow colours on the car, and it’ll be fascinating to see what it can come up with in season two. NEXTEV have already built some electric race cars for competition in China. The race day operations will again be run by Spanish team Campos Racing, who did a magnificent job last season. Nelson Piquet will return, but as of yet it’s unclear who the Brazilian’s team-mate will be. He had four last season, and there’s no doubt some driver consistency could make the team even stronger.

Dragon Racing
It’s been a rather tumultuous 12 months in Formula E for Dragon. The team missed the opening of Donington Park and the first shakedown amid rumours they were going to pull out before the season even began. Then there were take-over talks and the midpoint of the campaign, but despite all of this they emerged a superb second in the Teams’ Championship. It won’t be a manufacturer, but are rumoured to be using Venturi’s technology for season two. Again, no drivers are yet confirmed, but after such a strong end to the season, you’d have to imagine Duval and D’Ambrosio would be first choices.

e.dams-Renault
This one is quite simple, it’s Renault. As supporters since the very start of Formula E, it was only natural that Renault would have a big involvement. Carlos Ghosn, CEO of Renault and Nissan, was on the grid in Battersea, such is the French company’s enthusiasm for the championship. The battle with Citroen DS – who are partnering Virgin – is set to be intense. Expect the same driver line-up in season two as Buemi tries to go one better than the inaugural year, and the team look to retain its title.

Mahindra Racing
Details on Mahindra’s second season appear sketchy. One thing that seems clear is that they have left their partnership with the British team Carlin, in order to join up with Campos, who successfully guided Nelson Piquet to the driver’s title. As far as the technology goes, though, it’s a little harder to make out. It seems that details won’t be revealed until just before the Donington Park tests.

Trulli
Motomatica are the technology company that are partnering Trulli for season two. It is part of the Italian Tecnomatic Group, which has been in automotive engineering since 1973. Giuseppe Ranalli has been running the Group since 1998, and has recently declared it is working on a powertrain that’s capable of a peak power of 380kW, compared to the current Formula E maximum of 200kW. That, though, is a few years down the line, but it could be a strong season two for Trulli with such an openly ambitious technology partner.

Venturi
This is another easy one. Venturi has been constructing EVs since 2001 (although production was recently suspended), so it was natural for them to become a manufacturer once the regulations opened up. Weather thwarted its attempt to break the EV land speed record, where it was trying to surpass 600kph (372mph), so it certainly has the credentials to build a rapid Formula E car. Nick Heidfeld is expected to return to the team after his strong performances last season, while Sarrazin will no doubt hope his strong London performance will see him bag the other seat.

DS Virgin Racing
The final manufacturer onboard is Citroen, with its DS brand partnering Virgin. The project is run by Citroen Racing, the same operation that looks after the company’s incredibly successful World Rally Championship and World Touring Car Championship programmes. Testing is already well underway for the team, who has been running its season two technology for the past two months. After his London heroics, Sam Bird will most likely retain his seat to lead the team’s title assault. Jaime Alguersuari’s health-related withdrawal before London casts doubt over who is going to be in the second car. Citroen is likely to prefer a French driver, in which case Jean-Eric Vergne, Sarrazin, and even the likes of Romain Grosjean, could be in with a chance.

With so many new manufacturers involved, it will be fascinating to see what impact this has on the speed of the cars and the competitive order. Most of this will become clear at the Donington Park tests, which begin in less than three weeks. There we will see Formula E out-grow its one-make single seater persona, and begin to evolve into one of the most technologically important motorsport series in the world.