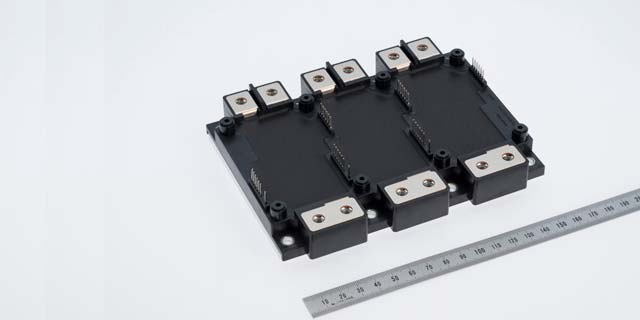 Mitsubishi will exhibit these modules at Power Conversion Intelligent Motion (PCIM) Europe 2015 in Nuremberg, Germany from May 19 to 21 and the Automotive Engineering Exposition in Yokohama, Japan from May 20 to 22, and PCIM Asia 2015 in China from June 24 to 26.

Power modules for electric and hybrid cars must deliver higher reliability than industrial-use modules due to the extremely high standards for vehicle safety. Mitsubishi Electric pioneered the mass production of power modules for hybrid vehicles in 1997, and since then the demand for these modules has grown in parallel with the expanding global market for electric and hybrid vehicles.

The new high-power J1-Series modules feature compact packages with small footprints, low power loss and high reliability for use in the inverters of electric and hybrid vehicles.

– The 6-in-1 package design shrinks inverter footprint to about 60% of six 2-in-1 J-Series T-PM inverters.