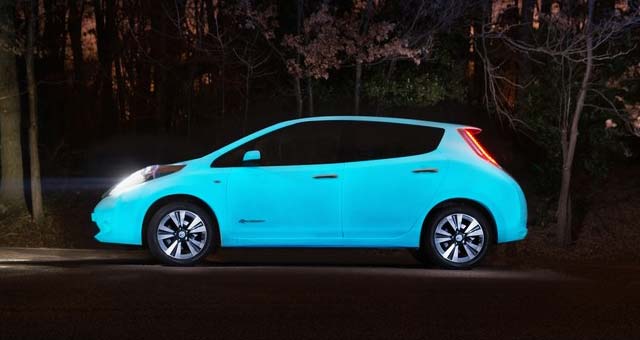 Nissan recently became the first modern passenger car manufacturer to apply glow-in-the-dark car paint to a car, to showcase how many customers of the world’s best-selling electric vehicle are powering their car from solar energy generated at home.

Now it has gone one step further, by driving the all-electric Nissan LEAF on the Smart Highway – the first time a phosphorescent car has been driven on the famous stretch of road. And the location of the world’s only luminescent highway was fitting, as Nissan has announced an uplift in electric vehicle sales of 313 percent in the Netherlands last year.

The innovative Smart Highway project was conceived by designer Daan Roosegaarde to help guide drivers in the dark, while saving energy that might otherwise be used in street lighting.

A 600-metre stretch of the N329 highway – a major transport link that runs through the city of Oss – has been upgraded with these Glowing Lines. The lines absorb light during the day and glows for eight hours at night. Here the landscape becomes an experience of light and information. As a result this increases visibility and safety.

“The Glowing Lines on The Smart Highway replace standard street lighting to reduce electrical energy consumption. To have the world’s first glow-in-the-dark car on our road is a privilege and it mirrors goals that we want to achieve with our Smart Highway” says Daan Roosegaarde.

The road’s photo-luminescent strips complement the Nissan LEAF’s innovative finish. The spray-applied coating absorbs UV energy and other visible radiation during daylight hours and glows for between eight and ten hours when the sun goes down.

While glowing car paint is already available, as are glow-in-the-dark car wraps, the bespoke, ultraviolet-energised paint created especially for Nissan is unique thanks to its secret formula. It contains a solid, odourless Rare Earth Metal called Strontium Aluminate.

It has been an outstanding year for Nissan’s electric vehicle range in Netherlands with sales increasing dramatically. Notable successes include fleet deals, which saw the City of Amsterdam and public transport provider Connexxion purchase 200 and 100 e-NV200s respectively.

Nissan will attend at the Amsterdam Motor Show on 17-26 April where its stand will showcase the all-electric zero-emission LEAF.

Mar 20, 2015Blagojce Krivevski
The Syrma Concept Hypercar [videos]Sales of Electric Motorcycles and Scooters Are Expected to Reach Nearly 6 Million a Year by 2024