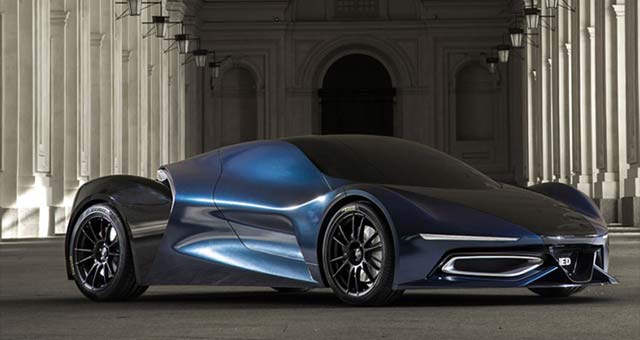 The students at the Transportation Design School at Istituto Europeo di Design unveiled the Syrma Concept, a fullscale study of an extreme sportscar with 900 hp electric-hybrid powertrain.

The Syrma Concept features an interior of three staggered front seats with the driver’s seat in the middle. Under the hood is a hybrid engine with a V6 twin turbo, four-liter heat engine and an electric engine — when all combined, the result is an impressive 900 horsepower. If the driver so chooses, there is an available option to run on electric-only, though range numbers weren’t announced.

Among the distinctive features is a laser projector that signals the car’s presence when running pure-electric mode via messages and images.

The seating layout allows maximum visibility to the driver, while the two passengers are cocooned in a teardrop-shaped canopy and an enveloping cockpit.

The Syrma Concept was created by 11 students as a part of their Masters thesis, unveiled at the 2015 Geneva Motor Show. Although this comes from an Italian design center, the students are from all over the world. The designers include Marshin Bhatt, Gaurav Anand Jagtap, Sunny Gurmukh Ramrakhiani, and Rahul Surendra Sadwelkar from India; Jacek Chrzanowski from Poland; Cho-ta Lu from Taiwan; Dror Peleg from Israel; Aldo Hernandez Schurmann from Mexico; Reza Shahla from Iran; and Jingwen Wu from China.