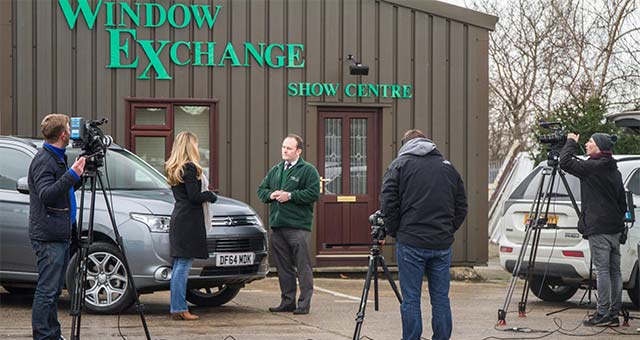 A family-run business in Cheshire is set to star in a new video campaign for the Mitsubishi Outlander PHEV.

The Window Exchange, in Northwich, is featured in one of five new films that will be shown on social media by Mitsubishi Motors in the UK.

Mark Bowler, Sales Director at the firm, based on Denton Drive Industrial Estate, agreed to take part in the campaign that focuses on real-life stories purely because he is so pleased with the car.

Mark, who has the Outlander PHEV as his company car, said: “I’m delighted with the car so I was more than happy to be filmed. My customers have already noticed the Outlander PHEV and they all want to know how it works. As a company, it’s the perfect vehicle for us.”

A film crew of seven, including presenter Ruth Frances, spent the day with Mark, filming him at the company’s showroom and on a visit to a customer.

The Outlander PHEV is an ideal vehicle for business owners because it qualifies for 100 per cent First Year Allowance against business profits. There are also savings on National Insurance contributions and the company car driver saves thousands in Benefit in Kind (BIK) tax. For Mark, who often has to visit customers, there are also great savings on fuel costs.

A major appeal of the Outlander PHEV for The Window Exchange was the impressive environmental credentials. It emits just 44g/km of CO2 and the official combined fuel consumption figure is 148mpg.

Mark also wanted a vehicle that could tow a trailer for when he goes camping with his wife and two daughters, aged 13 and nine.

He said: “The Outlander PHEV ties in with the efficient, economical credentials of the company and what we want to portray. On top of that, the company will save money, and the important thing for me personally is the five per cent BIK, which saves me thousands. It really is good for us in a number of ways.”