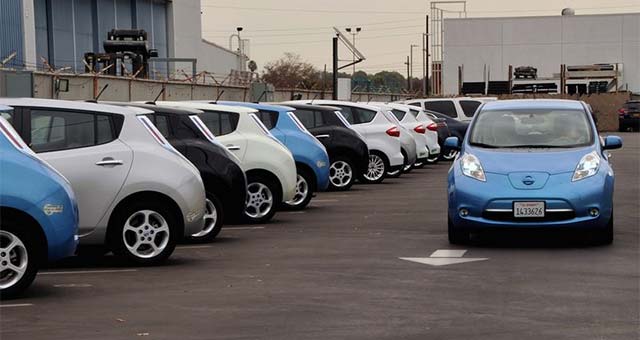 The 42-vehicle fleet marks a milestone in partnership between federal, state and private energy organizations, as well as in DoD’s demonstration of emerging vehicle-to-grid technology.

“Everything we do to fly, fight and win requires energy, whether it’s aviation fuel for our aircraft or power to run the bases that support them,” said Secretary of the Air Force Deborah Lee James. “This vehicle-to-grid pilot is a great example of how Airmen are driving the Air Force forward and finding new and innovative ways to make every dollar count.”

California energy providers and regulators worked closely with the Air Force on safety and performance testing as well as technical and regulatory aspects of launching the vehicles. The PEV fleet includes both electric and hybrid vehicles ranging from sedans to trucks and a 12-passenger van.

“The Energy Commission is excited to partner with the Air Force to test these vehicle-to-grid technologies,” said Janea A. Scott, California Energy Commissioner. “By investing $3 million in this project, we are supporting the demonstration of PEVs potential and value as grid integration and energy storage resources.”

The vehicles have the capability to direct power both to and from the electrical grid when they’re not being driven, known as vehicle-to-grid technology. Unique charging stations have been installed on LA AFB to support the vehicles’ V2G capability.

“We are excited to take part in this first-of-its-kind project that will pave the way for the integration of electric vehicles into our power network,” said Lisa Cagnolatti, vice president of the business customer division and customer service safety for Southern California Edison. “As this technology develops, it could provide useful service to the grid while helping to clean up greenhouse gas emissions from transportation sources.”

The V2G technology enables the vehicles to provide more than 700 kilowatts of power to the grid, sufficient power for more than 140 American homes. They also enhance the power grid’s reliability and security by balancing demand against supply without having to use reserves or standby generators.

“As the number of plug-in electric vehicles increases across the state, understanding the impacts on the grid and how power for fuel can be effectively managed will be critical,” said California Public Utilities Commissioner Carla J. Peterman. “This project represents an important step toward demonstrating the potential benefits these vehicles can have for our electric utilities, which will ultimately translate into benefits for all ratepayers in California.”

The Air Force plans to expand the V2G demonstration to Joint Base Andrews, Maryland, and Joint Base McGuire-Dix-Lakehurst, New Jersey. The service will also continue to look for additional capabilities, such as utilizing used batteries as a form of on-base energy storage, as well as pursuing additional opportunities to expand its existing partnerships.[wzslider height=”400″ lightbox=”true”]