Report: Plugging In Electric Cars Can Create Tens of Thousands of Jobs for California 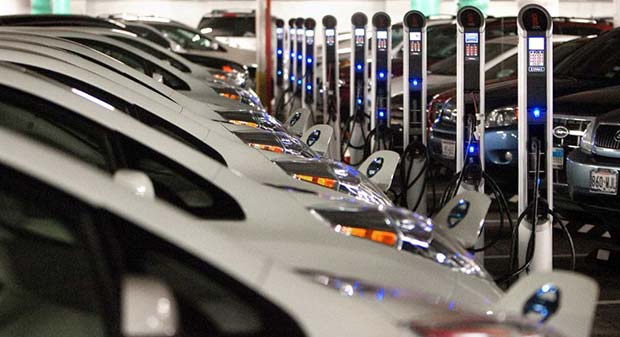 As California drivers struggle with gasoline prices well over $4 a gallon, and a cumulative $60 billion was spent on gasoline during the past year alone, a new economic research report shows that drivers may have another option that’s better for the state’s economy.

The report, commissioned by CalETC, shows that plug-in electric cars can create nearly 100,000 California jobs and provide a powerful local economic stimulus that will benefit people of all incomes whether they drive electric cars or not.

“This report shows the economic benefits of electric vehicles can help all Californians since electricity as a transportation fuel is significantly less expensive than gasoline, costing the equivalent of $1.50 per gallon,” says Eileen Tutt, Executive Director, California Electric Transportation Coalition.

Plug-In electric vehicles stimulate economic growth by promoting transport efficiency, reducing the cost of transportation fuel and saving money for households and enterprises. These savings return as a variety of expenditures that are, on average, more job-intensive and less import dependent than the petroleum fuel supply chain.

The average California driver spends $2,400 a year on gasoline. Electricity as a transportation fuel will cut those fuel bills by one third, help families save money while cutting pollution and decreasing our oil dependence.

To appraise the economic impacts of plug-in electric vehicle (PEV) deployment on the California economy, the report utilizes the Berkeley Energy and Resources (BEAR) model, a general equilibrium model. The BEAR model has been used in numerous instances to promote public awareness and improve visibility for policy makers and private stakeholders.

– Electric Vehicles can be a catalyst for economic growth, contributing nearly 100,000 additional jobs by 2030.

– On average, a dollar saved at the gas pump and spent on the other household goods and services creates 16 times more jobs than a dollar spent on refined petroleum product.

– Unlike the fossil fuel supply chain, the majority of new demand financed by PEV efficiency savings goes to in-state services, a source of diverse, bedrock jobs.

Individual Californians gain from electric car deployment whether they buy new cars or not. Average real wages and employment increase across the economy and incomes grow faster for low- and middle- income groups than for high-income groups.

PEV adoption stimulates economic growth by reducing the cost of transportation fuel, promoting transportation efficiency, reducing fuel use, thereby saving money for households and businesses. These savings are spent on basic needs and services that create many more jobs than the petroleum fuel supply chain.

HOW DO NON-PLUG-IN VEHICLE OWNERS PLUG INTO JOB BENEFITS

Detailed analysis of economy-wide impacts show that low-, middle- and high-income households all gain from PEV deployment, regardless of who buys new vehicle types or their income levels. This is because the spillover effects of gas savings that are spent in the local economy are widespread, creating jobs across nearly every sector of the economy and raising average real wages.

Most of the jobs created by PEV deployment are in service sectors such as healthcare and entertainment. Jobs like this are at very low risk of being outsourced and the dollars spent on these sectors tend to get spent on other local state goods and services creating additional jobs.

WHERE ARE THE NEW JOBS CREATED

Except for sectors directly linked to the fossil fuel supply chain, transportation fuel savings stimulate job creation across all economic activities where consumers and businesses spend money. This leads to employment growth far beyond “green” sectors and “green-collar” occupational categories. The oil & gas sector does not lose jobs per se, but instead experiences slower job growth overall over a twenty-year timeframe under these scenarios.

WHAT IS THE PEV GROWTH DIVIDEND

The PEV growth dividend arises from a relatively simple mechanism called “expenditure shifting.” Household and business fuel savings are spent on new vehicle technology and other consumer goods and services. Because spending on goods and services creates many more jobs per dollar of demand than the fossil fuel supply chain, the result of this shift is substantial employment growth. New jobs in turn lead to more spending, with its own induced income and employment stimulus, extending the growth cycle that economists call the multiplier process.

WHAT WERE THE ANALYTIC ASSUMPTIONS

• CalETC assumed an average gasoline price of $4 per gallon and an average electricity price around $0.15 per gallon. We took our fuel cost estimates direction from the US Energy Information Administration’s Annual Energy Outlook Forecasts, adjusted for California.

• The incremental PEV costs are based on the McKinsey assessment of battery costs as well as component costs the USEPA and NHTSA work done in cooperation with CARB.

• The report looked at deployment of PHEV20, PHEV40 and BEV and assumed equal distribution of these technologies, this was purely for simplification. The real finding of interest is that more electric vehicle miles driven is a good thing.

• The report considered all incentives available in California, including the federal incentives, but assume these incentive programs diminish over time and end by 2020.

• The report considered the value of the LCFS regulation, which was minimal given our very conservative assumption that LCFS credit value would be $32 per ton.

WHAT IS THE BEAR MODEL

CalETC selected Berkeley and the BEAR model because the BEAR model has been thoroughly peer reviewed over many years and has been fully documented. The BEAR model has been used in numerous instances to promote public awareness and improve visibility for policy makers and private stakeholders. The BEAR model is a standard general equilibrium model that considers both direct and indirect effects across the economy, this kind of empirical evidence helps to improve the understanding of the many indirect benefits of PEV deployment.