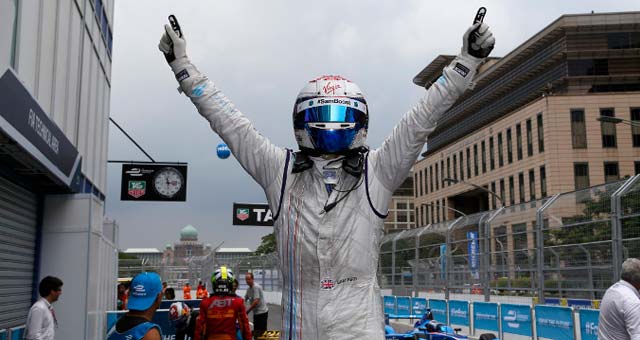 Sam Bird cruised to victory at the second race of the season in Putrajaya ahead of championship-leader Lucas di Grassi and Sebastien Buemi.

The Virgin Racing driver crossed the line to pick up the full 25-points and clinch his maiden ePrix win.

Bird said: “The weekend went really well, we were quick from the first outing and we were quickest in practice. Qualifying didn’t quite go our way as I think we were not in the best group for doing a fast lap time but we put that right in the race. “The first stint I was able to get a very good gap which meant we could take it easy and not make any silly mistakes, do some lift and coasting, and coast to the finish. I have to dedicate this win to a good friend of mine who is very ill. It’s very sad what’s happened to him and this one is for Jules.”

Audi Sport ABT driver Lucas di Grassi and e.dams-Renault’s Sebastien Buemi both managed to fight their way through the field to stand on the podium despite starting at the back of the grid.

Nicolas Prost continued the strong form he showed in qualifying to finish fourth. The Frenchman started from 11th position after carrying over a 10-place grid penalty for causing an avoidable collision in Beijing.

Dragon Racing’s Jerome d’Ambrosio showed his reliance from last place on the grid to come home in fifth. D’Ambrosio qualified in the top-three only to be penalised for exceeding the maximum power usage.

Oriol Servia, who inherited pole position, made a good getaway to retain the lead at the start as Daniel Abt dropped back with what seemed to be a power issue.

The Qualcomm Safety Car was deployed on the opening lap to clean the debris from the track as Amlin Aguri’s Katherine Legge and Michela Cerruti (Trulli) collided. Legge looked to make a pass on the inside but lost the back end and caused Cerruti to spin.

Brabham’s team-mate Franck Montagny was in a feisty mood as he carved his way through the field but forced Heidfeld into the tyre barrier on the outside of turn five. The stricken Venturi brought out the safety car for a second time.

Abt make the most of the opportunity and pitted under the safety car in an attempt to run a long second stint. However, it was a gamble that didn’t pay off as he dropped to 10th place to pick up a solitary point.

Mahindra’s Bruno Senna crashed heavily on the final lap in pursuit of Sebastien Buemi for the final podium spot.