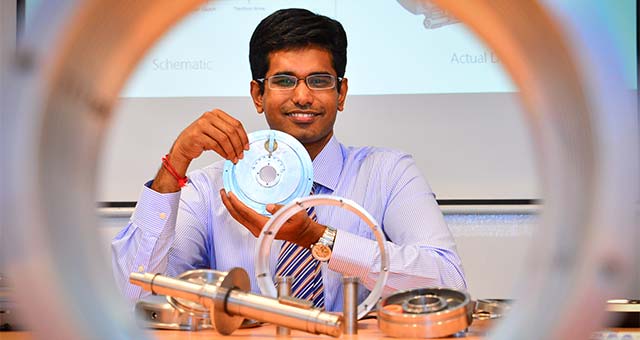 Scientists from Nanyang Technological University (NTU) and German Aerospace Centre (DLR) have invented a 2-in-1 electric motor which increases the range of electric vehicles.

This innovative engine integrates the traditional electric motor with the air-con compressor, typically two separate units. This novel, space-saving design allows the use of bigger batteries, which can increase the range of electric vehicles by an additional 15 to 20 per cent.

The new 2-in-1 design allows the electric motor to be more efficient in powering the car’s wheels, while its integrated air-con compressor uses less power due to synergy between the engine and the compressor, which can also tap on energy regenerated directly from the car’s brakes.

With the potential boost in range through the efficient use of energy, the joint invention recently won the Best Originality Award in the TECO Green Tech International Contest held in Taiwan.

NTU’s partner, DLR, the German aerospace and space agency will conduct further tests and improvements to the new engine with the aim of eventual commercialisation. The team is applying for a Proof-Of-Concept (POC) grant in Singapore. After the development of the prototype, test bedding and refinements will be done at DLR’s facilities in Germany.

Prof Subodh Mhaisalkar, Executive Director of the Energy Research Institute @ NTU ([email protected]), said, this innovation will pave the way for extending the range of electric cars, as the integrated design combines the two of the most important parts of an electric car, thus reducing its complexity into one highly efficient solution.

“This integrated design solution for air conditioning will go a long way in reducing the range anxiety of drivers, reduce maintenance costs, and will save time and money for the driver.”

For the automobile manufacturers, the new electric motor will also cost less to produce, as it requires less material than its counterparts.  Both the weight and size of the electric motor are reduced, creating more space for other components such as an auxiliary battery source.

Dr Michael Schier, from DLR’s Institute of Vehicle Concepts, said: “For electric vehicles, the air conditioning uses a lot of electrical energy, thereby cutting down the range of electric cars by up to 50 per cent. To increase the energy efficiency and therefore the range of electric cars, the thermal management and the integration of additional functions into existing powertrain components play a major role.”

“Back then, air-conditioning was something new that was an add-on feature to a car’s combustion engine,” said the 29-year-old Singaporean.

“Since we are now designing electric vehicles from scratch, I see no reason why we should keep both units separate. As we have proven, combining the two gives us synergy – a more efficient use of electricity and it also improves engine braking, which stops the car faster with lesser wear on the brake pads.”​

This research is part of NTU’s focus on sustainability research. Sustainable Earth and Innovation are two of NTU’s Five Peaks of Excellence, which are areas of research that the university hopes to make its global mark in. The other three peaks are Future Healthcare, New Media, and the Best of East and West.