Indianapolis to Have Largest Electrical Vehicle Fleet in the US 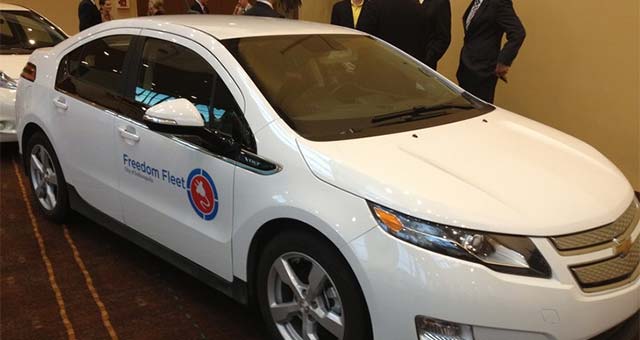 The City of Indianapolis will deploy the largest municipal fleet of plug-in electric vehicles in the nation by early 2016, under a new program detailed by Mayor Greg Ballard.

Through the initiative with Vision Fleet the City will upgrade 425 non-police pursuit sedans to plug-in hybrid and pure electric vehicles, cut the size of the fleet by 100 vehicles, and save $8.7 million over ten years.

In partnership with Indianapolis, Vision Fleet developed an innovative financing structure that bundles together all the expenses of purchasing, fueling, and maintaining the electric vehicles into a guaranteed rate that is lower cost than Indianapolis’ gasoline sedans.  Additionally, to unlock maximum savings for the City, Vision Fleet will utilize its comprehensive suite of technology, data analytics, and operational support designed specifically for reducing the cost of ownership of alternatively fueled vehicles.

The new Indy fleet vehicles will include 100% electric models, such as the Nissan LEAF, as well as plug-in hybrid models like the Chevrolet Volt and the Ford Fusion Energi, which offer extended range. The cars will be distributed throughout the fleet based on the needs of city fleet drivers and their departments, and be branded as Indy’s “Freedom Fleet”.  The City will replace 100 vehicles by the end of this year and 425 vehicles by the beginning of 2016. Each gasoline powered sedan in Indy’s fleet would have cost taxpayers approximately $9,000 per year over the next decade, including purchase, fuel, maintenance and insurance. Freedom Fleet vehicles will cost approximately $7,400 per year over that period; saving taxpayers approximately $1,600 per year per vehicle.

In addition to the projected savings, the city is doing its part to contribute to improved American energy security by reducing its dependence on oil, putting distance between the American economy and often-unstable global oil market.

In 2012, Indy became the first city in America to pledge to convert its city fleet to post-oil technology when Mayor Ballard signed an Executive Order mandating the change by 2025.  A year later the Mayor received the “E-Visionary Award” by the World Electric Vehicle Association for his leadership in promoting electric vehicles as a national security issue.

The “Freedom Fleet,” the first of its kind in the nation, represents an important leadership opportunity for cities across the country. Municipal fleets, major automobile purchasers in their own right, can find significant cost savings in transitioning their inventories to EVs, all while cutting their oil consumption and reducing American dependence on this resource currently responsible for powering 92 percent of the transportation sector at a cost of nearly $900 billion annually.