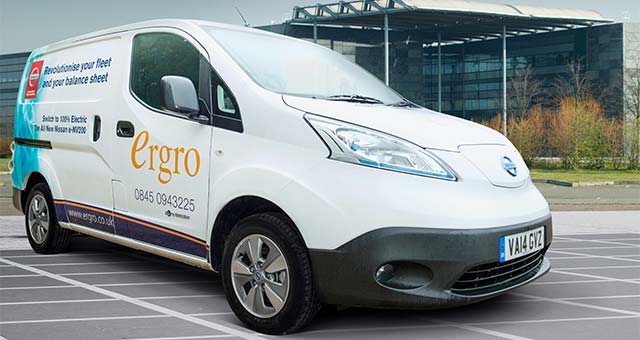 A leading building and building services engineering group is the latest UK business to accept Nissan’s ‘£2 Challenge’; putting the groundbreaking e-NV200 through its paces to show just how much fleet operators and business van users can expect to get from the 100% electric workhorse for just a couple of quid.

The Ergro Group, which operates a 35-strong fleet from its Dartford HQ, put the trailblazing model into service with its air conditioning service division, which employs a team of skilled engineers operating across London and the South East.

Undertaking the £2 Challenge, Ergro engineer Charlie Morgan drove the fully loaded e-NV200 from the company’s Dartford base to central London where he completed a full day’s worth of service calls before heading back.

At the end of the day, he had used just £1.20’s worth of the vehicle’s full £2 charge, clearly demonstrating how the e-NV200 can help fleet operators and business van users significantly reduce running and whole-life costs.

Speaking after the challenge, Ergro chairman, Chris Wollen, said: “We’ve been really impressed by the e-NV200 and what it can do.

“The running costs speak for themselves and are a real no-brainer but there’s a lot more to this van than cost savings.

“As a company that takes the sustainability of its fleet very seriously, we’ll definitely take a very close look at the e-NV200 when we next buy vehicles.”

Based on the Nissan NV200 – International Van of the Year 2010 – and utilising the proven technology of the record breaking Nissan LEAF, the new e-NV200 costs just two pence per mile to run.

Companies like Ergro that operate in central London also benefit from the model’s exemption from the congestion charge.

In addition to low running costs and emissions, users will also benefit from low maintenance costs that make for unrivalled total cost of ownership – £1,200 lower than a conventional diesel van over four years – and an unbeatable proposition for businesses large and small. Thanks to the unique driving experience of the e-NV200, drivers will feel less fatigued due to the lack of engine vibration in the cabin.

Meanwhile, the model, which is priced from £13,393 in panel van form (incorporating PiVG) offers a 4.2m3 capacity and a 703kg payload.