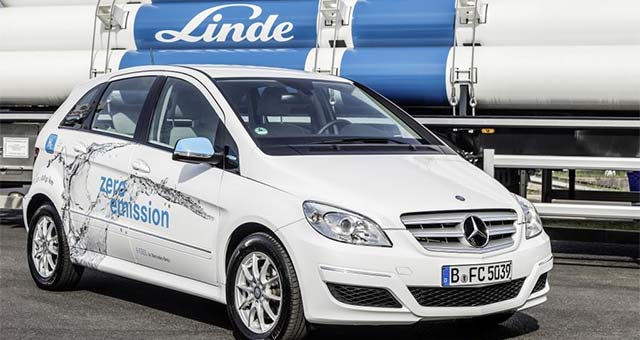 Daimler AG and gases and engineering company The Linde Group will team up with oil and gas companies TOTAL, OMV, Avia and Hoyer this year to significantly increase the number of hydrogen fuelling stations in Germany.

To this end, the two companies are investing around EUR 10 million in ten fuelling stations each. On 29 September, the first of the Daimler- and Linde-initiated public fuelling stations for fuel-cell vehicles was officially opened at a TOTAL multi-energy fuelling station on Jafféstrasse in Berlin-Charlottenburg.

Linde already secures half of the hydrogen for existing CEP fuelling stations from “green” sources, and it will power the 20 new stations with fully regenerative hydrogen. The gas is obtained from crude glycerol – a by-product of biodiesel production – at a dedicated pilot plant at Linde’s gases centre in Leuna. The certified green hydrogen obtained in this way produces far fewer greenhouse gas emissions than conventional methods. Linde also has other sustainable sources at its disposal like bio natural gas and water electrolysis using wind-generated electricity, as part of the ‘H2BER’ project for example.

“We are pleased to be driving this expansion of Germany’s H2 fuelling network,” comments Dr Andreas Opfermann, Head of Clean Energy & Innovation Management at Linde. “We are making a valuable contribution to the successful commercialisation of fuel-cell vehicles while supporting initiatives like the Clean Energy Partnership (CEP) and ‘H2 Mobility’.”

From 2017, Daimler AG plans to bring mass-produced competitively priced fuel-cell electric vehicles to market. To speed up technology optimisation and minimise investment costs, the company formed an alliance with Ford and Nissan at the start of 2013 for the joint development of a drive concept. Experts reckon that in 2018, well over ten thousand fuel-cell vehicles will populate European roads.

By the end of 2015, the number of H2 fuelling stations supporting this growing fleet in Germany is set to reach 50 with the support of the Federal Ministry for Transport along with partner companies and organisations.

Furthermore, the ‘H2 Mobility’ initiative, which Daimler, Linde, TOTAL and OMV are also part of, agreed last year on a detailed plan of action to expand the network to around 400 stations by 2023.

The following locations have been earmarked for additional stations by the end of 2015:

TOTAL
– Geiselwind, Bavaria, on the A3
– Fellbach, Stuttgart region
– Ulm
– Karlsruhe
– Neuruppin, Brandenburg, on the A24
– Cologne-Bonn Airport
– Berlin city centre (upgrade of the existing fuelling station at Holzmarktstrasse)