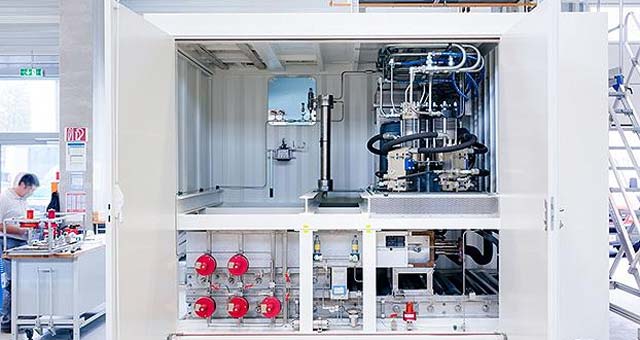 The Linde Group continues to advance the introduction of hydrogen as a fuel: the company officially opened the world’s first small-series production facility for hydrogen fuelling stations in Vienna.

Linde’s Vienna Application Centre was extensively modernised and expanded specifically for this project. Many ground-breaking hydrogen fuelling innovations have originated from this research and development hub in Vienna in recent years. These include Linde’s energy-efficient, compact ionic compressor, the IC 90.

At the opening ceremony, Linde and Iwatani Corporation announced that both companies had closed a deal for the delivery of 28 hydrogen fuelling stations with ionic compressors. The first of these units went on stream on Monday in Amagasaki near Osaka, Japan.

Unlike conventional piston-operated compressors, Linde’s IC 90 works with liquid salts. Because these ionic liquids do not have a vapour pressure, they do not evaporate or mix with the hydrogen gas. They also eliminate mechanical wear-and-tear and sealing problems inside the cylinders. In addition, the IC 90 increases energy efficiency.

Equipped with a sophisticated safety system and remote diagnosis and maintenance capabilities, the IC 90 meets all fuelling standards to ensure safe, silent fuelling and can achieve a pressure of 1,000 bar (14,500 psi) if required. With this compressor, technology leader Linde has made a valuable and key contribution to the ongoing enhancement of today’s hydrogen fuelling infrastructure.

Highlights of the new small-series production concept include a high degree of standardisation across all components, which are installed in a compact 14-foot container for ease of transport and integration in existing fuelling stations.

The expansion of production capacity in Vienna to 50 units a year dovetails with the introduction of the first series-produced fuel-cell cars by leading manufacturers such as Hyundai, Toyota, Honda and Daimler between 2014 and 2017.[wzslider height=”400″ lightbox=”true”]