Tesla Chooses Nevada for Gigafactory, Will Receive $1.3B in Incentives 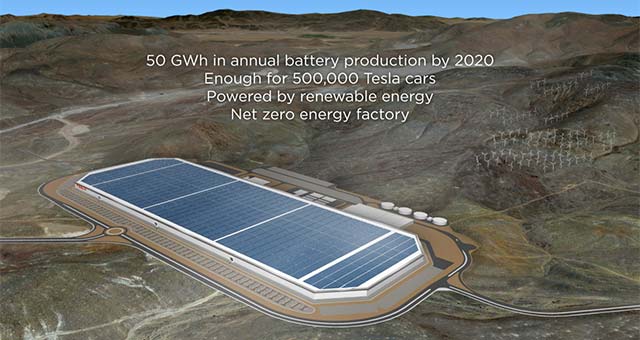 Nevada Governor Brian Sandoval and Elon Musk, Chairman and CEO of Tesla Motors, officially announced that Nevada has been selected as the official site for the Tesla Gigafactory.

“This is great news for Nevada. Tesla will build the world’s largest and most advanced battery factory in Nevada which means nearly one hundred billion dollars in economic impact to the Silver State over the next twenty years. I am grateful that Elon Musk and Tesla saw the promise in Nevada. These 21st century pioneers, fueled with innovation and desire, are emboldened by the promise of Nevada to change the world. Nevada is ready to lead,” stated Governor Brian Sandoval.

“I would like to recognize the leadership of Governor Sandoval and the Nevada Legislature for partnering with Tesla to bring the Gigafactory to the state. The Gigafactory is an important step in advancing the cause of sustainable transportation and will enable the mass production of compelling electric vehicles for decades to come. Together with Panasonic and other partners, we look forward to realizing the full potential of this project,” said Elon Musk, Chairman and CEO of Tesla Motors.

Gov. Brian Sandoval is asking the Legislature for as much as $1.3 billion in financial incentives to help Tesla build its Gigafactory, said Steve Hill, executive director of Sandoval’s Office of Economic Development.

Japanese supplier Panasonic Corp. will produce lithium ion cells for battery packs and will fund part of the cost of the plant, which is considered an important part of Tesla’s ambitions of popularizing and lowering the price of EVs.

The Tesla Gigafactory would bring the cost of batteries down by producing them on a huge scale. Its approximately 10 million square feet, equivalent to about 174 football fields, would be running by 2017. That is when Tesla hopes to introduce its Model 3.