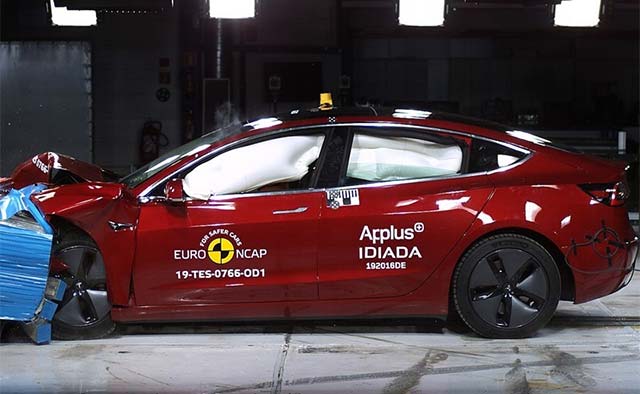 Tesla Model 3’s safety record continues in Europe, where it has been awarded a 5-star rating from the European New Car Assessment Programme (Euro NCAP).

The Tesla Model 3 made a strong debut with a perfect score in the frontal offset deformable barrier crash test, a mainstay of Euro NCAP’s assessment since its inception in 1997. Its performance in the Safety Assist tests particularly impressed, thanks to its superb driver assistance systems like lane support, speed assist and autonomous emergency braking.

The Tesla’s 94 percent score in 2019 Safety Assist tests is the best yet under Euro NCAP’s most recent protocol.

The Programme’s four categories – each of which Model 3 earned 5-stars in – evaluate a car’s ability to protect adults, children, vulnerable road users like cyclists and pedestrians, as well as its safety assistance features. In this latter “Safety Assist” category, which evaluates a car’s active safety features including its ability to avoid accidents, mitigate injuries and prevent drivers from unintentionally drifting out of their lane, Model 3 earned the highest score that Euro NCAP has awarded to date under their 2018/2019 testing protocols.

Euro NCAP’s results demonstrate the impact of recent improvements Tesla made to the Automatic Emergency Braking (AEB) system that were extended to all Model S, Model X and Model 3 cars built since October 2016 via an over-the-air software update earlier this year. They also reflect important safety improvements made with new features like Lane Departure Avoidance, Emergency Lane Departure Avoidance, and conditional speed limits based on time of day and weather conditions.

Tesla’s engineers developed each active safety feature evaluated by Euro NCAP by leveraging the real-world data collected from the sensor suite of every Tesla vehicle made since October 2016, coupled with data from billions of inputs from actual drivers to help us understand how drivers behave in dynamic scenarios. This data gives a more precise understanding of the environment around our cars and the different ways that accidents happen, allowing us to more accurately predict when an accident is likely to occur and deploy automated technology to mitigate or avoid it.

In addition to recognizing the benefits of active safety features enabled by data and technology, the Euro NCAP results also demonstrate the importance of Model 3’s all-electric architecture and powertrain design, which ensures the structural integrity of the vehicle and protects occupants with its fortified battery pack, rigid passenger compartment, and overall low center of gravity.