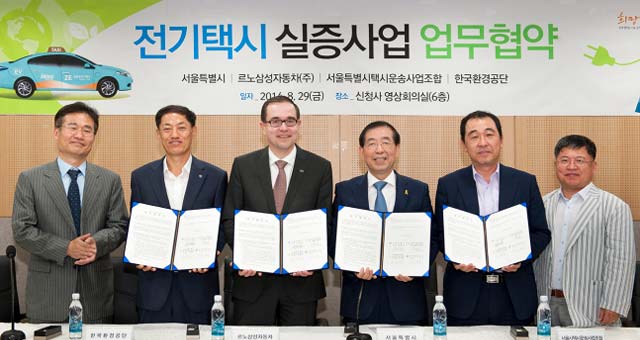 Renault Samsung Motors is loaning ten SM3 ZE electric sedans to Seoul City for free so that members of the Seoul Taxi Association and their passengers can discover the benefits of using an EV for taxi work.

Free use of the cars is part of the campaign, which runs until April 2015. Taxi businesses involved in the scheme will be exempt from tolls through a number of tunnels into the city. They will also be given a 50% discount on parking fees in the city center and will be given free access to the City’s 34 quick chargers, a network that the Korea Environment Corporation has undertaken to expand still further.

The SM3 ZE, which began mass production in 2013, is the only EV made in the country that has enough interior space to make them useful as taxis. Renault Samsung said it sold 398 units last year, making the vehicle the country’s best selling EV, while sales numbers reached 165 in the first seven months of this year.