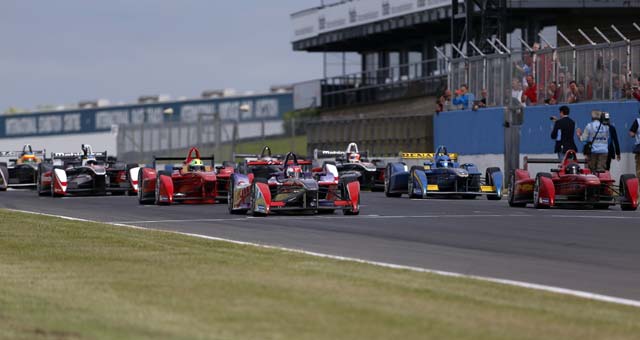 Motorsport will enter a new era with the first ever FIA Formula E race, staged in China on the streets of Beijing today.

Contested in 200kW (270hp) electric single-seater race cars, this championship is set to provide an important framework for research and development into “zero-emissions” vehicles.

In all areas, the FIA Formula E championship breaks new ground. Race cars, teams, circuits and sporting format: everything is new in this competition, which is based on three core values: Energy, Environment and Entertainment.

As early as 2011, the FIA stated its desire to see a fully-electric racing series. In line with the challenges facing the motor industry, the championship is expected to serve as a framework for research, whilst also driving interest among the general public in electric cars and promoting sustainability.

Combining engineering, technology, sport, science, music and entertainment, the plans of Alejandro Agag – the Spanish businessman already involved in motorsport – were approved by the FIA on 27th August 2012. The championship promoter then entrusted Spark Racing Technology with the job of designing and building the first forty Formula E single-seater race cars. Among the technical partners involved in this venture, Renault played a central role in becoming the architect of the electric powertrain.

Formula E has attracted some major backers and entrants, such as DHL, Virgin, Mahindra, Qualcomm and Audi. It has even pulled in A-list celebrities; actor Leonardo DiCaprio is a founder of one team, Venturi.

The vast majority of electric vehicles are currently driven in cities. The same will apply to Formula E races, which will be held at ten city-centre circuits, on the streets of some of the planet’s greatest cities. Starting today (September-13) and concluding in June of the following year, the race calendar complements that of F1.

The FIA Formula E championship is open to ten teams, each with two cars. A very high quality field is set to contest the inaugural season, since ten of the ten of the confirmed drivers have already competed in Formula 1 at some stage of their career. At the meetings, the drivers will all have two single-seater race cars that they may use as they see fit. The races will feature one mandatory change of car.

Each meeting will use the same organisation. All rounds will be one-day events, ensuring disruption is limited for the host city and local residents, whilst also keeping running costs down for the teams. There will be no shortage of action for fans, and the low noise levels of the cars means that it will even be possible to organise concerts during the races!

In the morning, two practice sessions will give the drivers and teams time to familiarise themselves with the layout of the circuit and to fine-tune their set-ups. Just after midday, qualifying will be split into four ten-minute sessions, with five cars challenging for pole position in each group.

The race – or ePrix – will last around an hour, with a mandatory pit stop to change cars for each driver. Unlike practice and qualifying, where full power will be available (200kW – 270hp), power will be restricted in the races to 150kW (202hp). The three most popular drivers with online fans will be rewarded with a FanBoost (180kW for five seconds).

Points will be awarded to the top ten finishers using the standard FIA scale (25, 18, 15, 12, 10, 8, 6, 4, 2 and 1 points). The driver that takes pole position will be given three bonus points and the driver that sets the fastest race lap will earn two points. The title of Drivers’ World Champion will be awarded to whoever has the most points at the end of the season, with drivers able to discard their poorest result. The Constructors’ World Championship will be decided by counting all results for both cars.

Specifically developed for the FIA Formula E championship, the Spark-Renault SRT_01E is packed with the technical expertise of some of the greatest names in motorsport. The car’s electric powertrain architecture, its systems integration, powertrain electrical safety and performance optimisation have all been provided by Renaultsport engineers.

Officially confirmed on 15th May 2013, the partnership between Renault, Formula E Holdings and Spark Racing Technologies was a real ‘no brainer’ for the manufacturer, a market leader in the field of zero-emissions cars. With a range of three Z.E. vehicles already on sale, Renault grabbed the opportunity to demonstrate the excellence and reliability of its solutions.  The FIA Formula E championship also serves as a unique technological laboratory.

With its experience of working in the design, development and marketing of sports and racing cars, Renaultsport was the partner most suited to taking on the job of managing the project. The team formed for the design phase featured experts from Renaultsport. Since KERS (Kinetic Energy Recovery System) first appeared in the F1 world championship in 2009, and then with the switch to the 2014 Power Unit, Renault has acquired unique know-how in energy recovery and usage systems. The teams based at Viry-Châtillon also have suitable measurement, analysis and simulation equipment.

Like all vehicles designed for single-seater racing, the Spark-Renault SRT_01E features components chosen for their performance level, cost and coherence. Throughout the development phase, the architect must therefore make sure the initial specifications are complied with.

As the development of a totally new kind of single-seater represented a major technological challenge, Formula E Holdings and Spark Racing Technologies joined forces with some of the greatest names in motorsport for the project:

– Spark Racing Technology – The company founded by Frédéric Vasseur managed the mechanical design (suspension and aerodynamics) and assembly of the 40 cars.

– McLaren Electronic Systems – Coupled with a Hewland five-speed paddle shift sequential gearbox, the electric motor and inverter are derived from the supercar P1.

– Williams Advanced Engineering – The engineering subsidiary of Williams Group designed and built the batteries, as well as their electronic management system.

– Michelin – The tyre manufacturer developed bespoke 18’’ treaded tyres for use on both wet and dry tracks.

Given that the series will be held on street circuits, Formula E must push back the boundaries in terms of safety. For example, the bodywork has been designed to avoid the cars from being lifted up if the wheels get tangled.