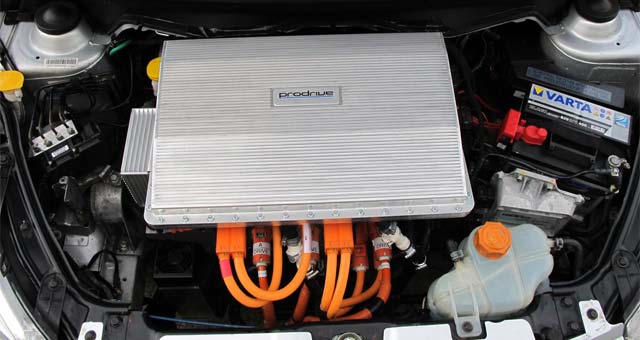 A consortium led by Prodrive has successfully run a silicon carbide-based multiport DC-DC converter in an electric car.

The converter controls power flow between multiple energy sources and has been able to achieve a class leading efficiency of 98.7%, while increasing power density and reducing the size and weight of the converter when compared to silicon-based systems.

The DC-DC converter acts as a hub that transfers energy between key components of the vehicle’s high voltage electrical system.  It has four ports: two connect to the traction motor and high voltage battery; a third connects to a secondary energy source, which in this test car is a super capacitor bank; and the fourth powers the vehicle’s 12V systems. The converter is able to match the voltages of these components and transfer energy between them in response to CAN commands from an external supervisory controller.

The test vehicle is a Tata Vista EV demonstrator vehicle, developed by the Tata Motors European Technical Centre in Warwick, which has a 220 V battery and 37 kW traction motor.  The vehicle also has two 200 kJ super capacitor banks, which operate at 75-150 V.

A key aspect of the converter is the use of silicon carbide devices.  These operate at a much higher frequency than equivalent silicon components – at 75 kHz in the test vehicles – with a significant reduction in switching losses.  This has resulted in a significant reduction in the size of the magnetic components and has enabled the converter to achieve a class leading efficiency of 98.7%, a gravimetric power density of 10.5kW/kg and a volumetric power density of 20kW/litre.

The use of silicon carbide power modules could also allow much higher temperature operation than conventional silicon modules.  This provides the potential to integrate the power electronics and IC engine cooling systems in hybrid applications.

The consortium is now working on a follow up project which increases the converter operating voltage to 750 V, further increases power density and demonstrates operation at increased coolant temperatures.

Prodrive has worked on hybrid and electric vehicle programmes for more than a decade, starting with a prototype four-wheel drive parallel petrol/electric hybrid built in 2001. Subsequently it has worked on a number of hybrid and EV projects including: motorcycles, commuter vehicles, passenger cars and trucks covering prototype development through to homologation and diverse electrical technologies from HV batteries, super capacitors, fuel cells and high-speed electrical and mechanical flywheels.