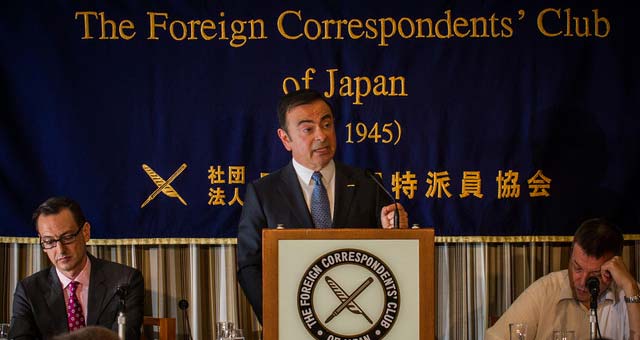 The Nissan CEO said new technologies including automated lane controls and highway traffic management systems, to be introduced over the next four years, would demonstrate to consumers the viability and value of Autonomous Drive systems, which Nissan intends to make commercially viable by 2020.

Autonomous Drive technologies, which are being introduced progressively by Nissan, are designed to enhance road safety and driving conditions by automating everyday tasks for motorists. Unlike pilot-projects for completely self-driving vehicles, currently undergoing preliminary tests elsewhere in the industry, drivers remain in control and “at the wheel” in Nissan models equipped with Autonomous Drive functions.

“By the end of 2016, Nissan will make available the next two technologies under its autonomous drive strategy,” said Mr. Ghosn. “We are bringing to market a traffic-jam pilot, a technology enabling cars to drive autonomously – and safely – on congested highways. In the same timeframe, we will make fully-automated parking systems available across a wide range of vehicles.”

In a speech to the Foreign Correspondents Club of Japan, he added: “This will be followed in 2018 by the introduction of multiple-lane controls, allowing cars to autonomously negotiate hazards and change lanes. And before the end of the decade, we will introduce intersection-autonomy, enabling vehicles to negotiate city cross-roads without driver intervention.”

Nissan has been at the forefront of industry efforts to introduce greater automation in new vehicles, aimed at relieving motorists of mundane tasks while enhancing safety, reducing congestion and helping to lower emissions.

He predicted that four major trends would drive demand for Autonomous Drive technologies, more zero-emission vehicles such as the Nissan LEAF, the world’s best-selling electric vehicles, and greater in-car connectivity.

“The first is the rise of global mega-cities, which is increasing the need for innovations to ease congestion, reducing emissions and improve traffic management,” said Mr. Ghosn. “Second, demand is growing for in-car communications that meet or exceed the high expectations of the digital generation. Our vehicles must be as connected as the smartphones and tablets that this generation depends upon day in and day out.

“Third, there is the need to bridge the generation gap by providing vehicles that appeal to the world’s growing population of seniors. These consumers want technologies and automated systems that enable them to drive safely, for longer.

“Finally, the fourth mega-trend is the pressing need to embrace gender diversity. This means recognizing the vital role that women play as consumer-purchasers, decision-makers and managers throughout the car industry.”

In a wide-ranging speech on new technology and changing market demographics, Ghosn said that the company expected more than 1.5 million Nissan vehicles to be connected to enhanced communications by next year, utilizing cloud-based systems to offer better access to social media, entertainment apps and voice recognition software among other services.

He predicted such services and greater vehicle automation would become more important amid the growth of mega-cities of more than 10 million people, with increasing road-use and need to cut both congestion and emissions. Among such road users, he cited demands from younger motorists for better in-car connectivity, the need to offer more automation for the senior generation and to make vehicle design, marketing and performance more attuned to women, who account for a large proportion of new car purchases.

“Nissan will be part of the transport solution in the growing number of megacities. We will continue to make our cars more connected. We plan to lead in delivering Autonomous Drive vehicles. And, in every part of the business, we are recognizing the unique needs of elderly drivers and the impact and influence of female customers.”