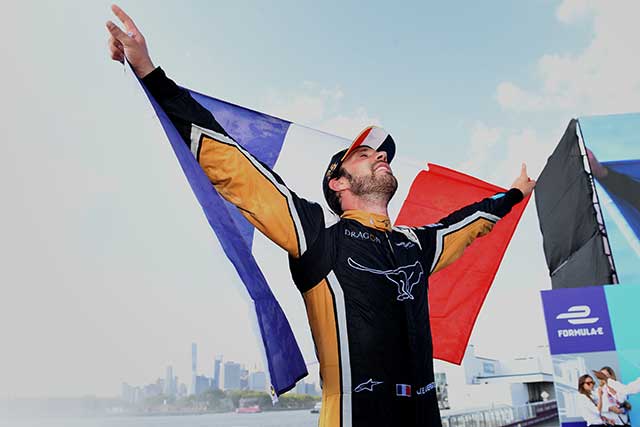 Lucas di Grassi took his second consecutive win of the season in New York, as Jean-Eric Vergne fought through the field to move out of reach of title rival Sam Bird and secure the ABB FIA Formula E Championship with one round to spare.

Both title contenders started on the back foot after a difficult qualifying session, but Vergne drove a resilient race from the back row of the grid to fifth position – beating Bird and extending his lead to 31-points and clinching the Formula E crown regardless of the result later today.

After being excluded from qualifying due to technical infringement, it looked like the championship would go down to the wire once more. However, Vergne calmly and carefully moved his way up the order leaving Bird defenceless – becoming the fourth different champion in as many seasons.

Bird couldn’t match the speed of his nearest competitors and agonisingly had to watch his championship hopes fade away as Vergne eased by and off into the distance, eventually coming home in ninth for DS Virgin Racing.

It was a different story for Audi Sport ABT Schaeffler, which repeated its dominant display from Berlin to pick-up another one-two finish and hold the accolade as the only team to manage it on two separate occasions.

Outgoing champion di Grassi showed the speed to pick-up his second win in succession after standing on the top step last time out on the streets of Zurich.

Di Grassi started out of position in 11th after a tricky qualifying session, but it wasn’t enough to stop the Brazilian taking his eighth E-Prix victory, which came from the second-lowest winning starting position – only bettered by his own effort in Mexico City last season from a lowly 15th place.

His Audi Sport ABT Schaeffler team-mate Daniel Abt led the majority of the race during the opening stint – moving ahead of Sebastien Buemi, who lined-up on Julius Baer pole position for Renault e.dams. Both Audi cars pitted on lap 23 to swap cars and returned to the track in close proximity.

As di Grassi put pressure on Abt, the German made a mistake in the new section of track at Turn 6 and forced him out of position on the run down to the popular overtaking point at the Turn 11 chicane. Di Grassi pulled alongside Abt and made the move for the lead.

Abt chased di Grassi to the chequered flag after a heavy crash from Alex Lynn brought out the Qualcomm safety car with less than 10 laps to go – but it was to no avail as Abt had to settle for second place and Visa fastest lap.

Buemi rounded out the podium places in third for Renault e.dams, ahead of Venturi’s Tom Dillmann in fourth – his highest-ever finishing position in Formula E beating his previous best of seventh in New York last year.

Nick Heidfeld continued a consistent run of form and matched his result from Zurich in sixth behind Vergne, with TECHEETAH team-mate Andre Lotterer following the newly-crowned champion through the pack from 19th to seventh.

Maro Engel held position in eighth ahead of Bird and Nico Prost, who dropped from third on the grid to complete the top-10 points-paying positions.

Vergne may have already sewn-up the title and etched his name in the history books, but there’s still one more race to go tomorrow and just five points separating TECHEETAH and Audi Sport ABT Schaeffler in the team standings.

Jul 15, 2018Blagojce Krivevski
Honda And Panasonic To Begin Research Experiment On Battery SharingJune 2018 electrified vehicle sales in the US