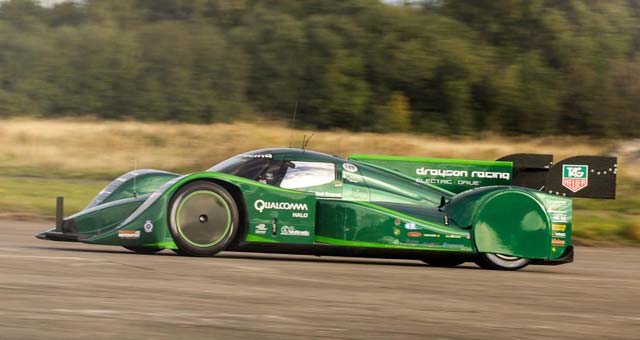 EV speed record holder Lord Drayson announced the launch of the Drayson Wireless Limited, a new venture that will seek to commercialize wireless energy technology developed over a number of years at Imperial College London.

Working closely with Imperial Innovations plc, Drayson Wireless said it will rapidly bring the technology to market in numerous applications and sectors.

The new business builds upon Drayson Technologies’ expertise in the use of wireless power in automotive applications such as the development of the Drayson B12/69 wirelessly-charged electric race-car that set a new FIA World Electric Land Speed Record in 2013.

The Drayson Wireless near-field systems can transfer up to 1.5 kW over a distance of up to 0.5 m using a lightweight receiver weighing less than 0.3 g/W. In addition, Drayson Wireless long distance power transfer system can transfer up to 10 mW at distances up to 5 m. The systems operate at high efficiencies (over 80% end-to-end efficiency), while operating through variable vertical offsets, separation distances and angular misalignments.

The business is based upon world-class research conducted over several years by scientists from the Department of Electrical & Electronic Engineering at ImperialCollege. The Imperial team is led by Dr Paul Mitcheson, Dr Stepan Lucyszyn and Dr David Yates, the academic founders of Drayson Wireless. In particular PhD research by Dr Manuel Pinuela is central to the venture and as such Dr Pinuela becomes Chief Technology Officer.

In addition, Lord Drayson has brought together an experienced team with senior-level experience from companies such as Qualcomm, PowderJect and Circassia, with backgrounds in building global businesses in wireless technology and life sciences.

Launching the new company has led Lord Drayson to restructure his interests. A new holding company, Drayson Technologies Ltd, has acquired the business and assets of Drayson Racing Technologies LLP and its Formula E team. The holding company also controls the new venture Drayson Wireless Ltd, which is run in collaboration with Imperial Innovations Plc. This structure reflects the intention to focus on the wireless technology business.

Drayson stated a guiding principle of the business is to incubate world-class scientific research and help translate it into commercial success. As such, Drayson Wireless has signed a long-term strategic research agreement with ImperialCollege to continue research in the field and to work with Imperial Innovations to accelerate the transfer of wireless energy technology from the research lab to the market place.

“Over recent years we have seen a revolution in the way wireless technology has transformed communications, making smartphones and social media part of our everyday lives.  The same is about to happen to energy and Drayson Wireless aims to be at the centre of this next revolution,” said Paul Drayson Chairman & CEO of Drayson Technologies.