Charging Electric Car Through its Tires 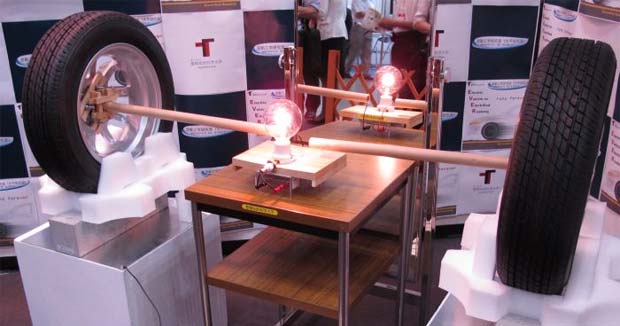 Japanese scientists have demonstrated a prototype for charging electric car through its tires while they are on the move.

Their solution is in the form of a wireless power prototype that can successfully transmit electricity through the concrete block.

Researchers from the Toyohashi University of Technology successfully transmitted electricity to a pair of tires through a 4in (10.16cm) thick concrete block at a trade show on wireless technologies in Yokohama last week.

Takashi Ohira, an electrical engineering professor at the Toyohashi University of Technology, who leads the team, has developed his electric field coupling system to supply a charge to a car through its tires. The goal is to enable power transmission as the vehicle’s tires travel along the road with suitable efficiency and power transfers.

In their demo, four-inch blocks of concrete, to represent the road’s surface, were placed under full-size car tires, with metal plates in-between. Electricity measuring from 50 to 60 watts was transmitted to the tires, and then used to turn on a light bulb that had been attached to the tires. The team has dubbed their project EVER, for Electric Vehicle on Electrified Roadway.

To make their present technology useful, the electric power needs to be increased by 100 times. But, moving ahead, the group said that they are up to the task of meeting the project’s challenges. Their next target is to sustain the power transmission efficiency through a 20cm block of concrete; which is typically the thickness of concrete layer on roads.

One of the biggest issues preventing the electric car from taking over the roads is their incredibly limited battery life. It typically takes several hours to recharge an electric car’s battery, after which you get a range of about 100 miles.