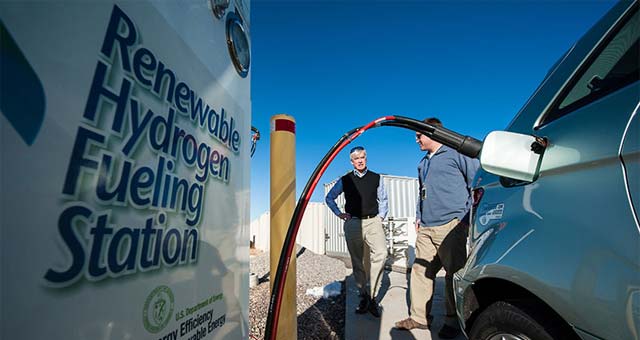 Hydrogen fuel cell electric vehicles (FCEV) were the belles of the ball at recent auto shows in Los Angeles and Tokyo, and researchers at the Energy Department’s National Renewable Energy Laboratory (NREL) continue to play a key part in improving performance and durability while driving down costs.

The driving public has long been tantalized by the allure of a vehicle that emits nothing but water from its tailpipe, but now that Toyota, Hyundai, and Honda have all committed to putting them on the market by 2015, the stakes have changed.

It’s one thing for the automakers each to sell 1,000 or so cars the inaugural year, but quite another to ramp it up to 10,000 and beyond until these cars are an appreciable percentage of the marketplace.

Sunken engineering costs and the drive to improve economics through economies of scale are challenges for any new vehicles introduced to the market, including early internal-combustion hybrids, said Bryan Pivovar, fuel cell group manager in the Chemical and Materials Sciences Center located at NREL’s Energy Systems Integration Facility (ESIF). But, no one doubts that the Prius is now a success—not just in being the best-selling hybrid on the market, but by enhancing Toyota’s image as a green company and technology leader, he added.

Fuel cell electric vehicles could follow that same trajectory, but they have an extra hurdle to clear. They won’t become commonplace until there’s an infrastructure of fueling stations—and only a fraction of what is required has been built so far. “Nobody wants to have a hydrogen fueling station if there aren’t enough fuel cell cars to support it,” Pivovar said. Likewise, auto manufacturers are reluctant to go into full-scale production if there aren’t enough places to fill up. “It’s a chicken and egg scenario.”

Cleaner Fuels a Research Priority at Energy Department
NREL hydrogen researchers are working with auto manufacturers, component vendors, and others to take a hard look at both the infrastructure and the cost challenges. NREL’s new ESIF includes 7,000 square feet of lab space built for hydrogen and fuel cell research. Approximately 50 researchers contribute to hydrogen or fuel cell related tasks, including production, storage, codes and standards, technology validation, and analysis.

Researchers at NREL are examining the best ways to create hydrogen via electrolysis using wind and solar power. The most common way to produce hydrogen today is through steam reforming of natural gas—a tried-and-true approach, but one that generates greenhouse gases.

Just a few months ago, the Energy Department’s Fuel Cell Technologies Office, within the Office of Energy Efficiency and Renewable Energy, which supports NREL’s research at the ESIF, announced more than $7 million for projects in Georgia, Missouri, Pennsylvania, and Tennessee that will help bring cost-effective, advanced hydrogen and fuel cell technologies to market faster. In the past five years, fuel cell durability has doubled; since 2005, the amount of expensive platinum needed in fuel cells has fallen by 80%, according to the Energy Department.

Pivovar predicts that hydrogen fuel cell vehicles will take off first on islands such as Hawaii or Japan where a car can’t get too far away from the nearest refueling station and fuel costs are often higher, and metropolises such as Los Angeles where smog provides an extra incentive for clean engines. “The motivations for cleaner engines often rise from local concerns, rather than global concerns.”

NREL is analyzing the barriers and costs associated with installing enough hydrogen refueling stations to make fuel cell vehicles viable. One intriguing shortcut is to use existing natural gas lines to distribute hydrogen. Studies are exploring limiting hydrogen concentrations to less than 15% of the gas in the lines to avoid issues such as hydrogen embrittlement and to reduce the high capital costs of installing completely independent infrastructure.

Lowering the Amount of Platinum Key to Lowering Cost
The NREL fuel cell group has a strong focus on helping lower the cost of fuel cells. One important avenue is to decrease the amount of the precious metal platinum used in the fuel cell. Platinum plays a key role as a catalyst for the electrochemical reactions that occur in a fuel cell that convert hydrogen and oxygen into electricity, heat, and water.

Fuel cells produce electricity directly and can lead to much higher efficiencies than are possible with combustion engines.

Internal combustion engines powered by gasoline burn the carbon-based fuel in the presence of oxygen, producing carbon dioxide and other pollutants such as nitrogen oxides (NOx) as byproducts. In fuel-cell vehicles, the only thing coming out of the tailpipe is water. In fact, they are so clean and efficient that they have provided both the electricity and water used by astronauts in space.

A typical FCEV uses polymer electrolyte membrane (PEM) fuel cells, which combine hundreds of single cells to make a fuel cell stack. The single cells consist of polymer membranes that are coated with catalysts, typically platinum supported on carbon. The high-pressure hydrogen gas cylinders on board release just enough hydrogen through the stack to produce the electricity needed to power the car. The vehicles use compressed hydrogen gas cylinders now, but could someday store the fuel in powder form.

NREL scientists also have demonstrated activity and durability improvements for platinum if the surface is extended. “We’re trying to make ultra-thin platinum films limited to a few atomic layers, while still making sure it covers the surface,” Pivovar said. If platinum levels can be further dropped by two-thirds, hydrogen fuel cells could reach precious metal loadings on parity with catalytic converters in today’s internal-combustion engines. The catalytic converters mandated for pollution concerns in conventional vehicles are not needed for the ultra-clean exhaust of fuel cell vehicles.

NREL Analyzing Contaminants, Components
NREL is working with GM on improving the understanding of how contaminants affect fuel cells. Eventually, fuel cell systems will use inexpensive plastic, similar to the kind that is used to make containers, but without some of the added chemicals. NREL is examining which chemicals can be taken out of the plastic—and which need to stay in—in order to ensure reliable performance at a low price.

NREL is analyzing the components that will be needed to power hydrogen fuel cells. One approach is to put promising component materials in water, leach out potential contaminants, and carefully test for possible negative impact. “We perform analytical characterization of what’s coming out in what I refer to as our CSI lab,” Pivovar said, alluding to the popular Crime Scene Investigation TV series. Test results lead to recommendations for different materials or tweaks to current materials.

NREL’s instruments can test efficiency while conditions change on catalyst-coated membranes, or while different contaminants are introduced. NREL also tests the electrochemical performance of the catalysts, a way to discover just how much platinum can be removed from the cell before it hampers efficiency. Considerations are also given for how materials can be recovered and recycled, particularly platinum. For fuel cell component manufacturing, NREL’s unique web-line and quality-control diagnostic techniques are being employed to help manufacturers address costs and scale up issues associated with increased production volumes. Specifically, NREL is developing diagnostic techniques and applying them to roll-to-roll goods to ensure product quality requirements can be met at high production volumes.

Industry Demonstrates Commitment to Hydrogen
In the past 18 months, several auto manufacturers have formed partnerships to build platforms for fuel cell vehicles. So, when BMW comes out with its first hydrogen fuel cell vehicle, it will use the same platform as Toyota. Likewise, Nissan, Ford, and Daimler have formed a partnership for a fuel cell and drivetrain platform. Honda and GM also are working together. “They realize that if fuel cells are going to succeed, they can’t succeed just for one manufacturer, but for all of them,” Pivovar said. “Working together lowers research costs and risks. And having just a few platforms, rather than several, will help them get their volumes up much quicker. It shows a commitment that they are really going to do this.”

NREL’s data show that fuel cells made striking improvements between 2005 and 2013. An important benchmark will be when fuel cell vehicles cost about the same as other vehicles amortized over a lifetime.

“We look to perform an enabling role,” Pivovar says of NREL’s hydrogen R&D program, which has a budget of about $13 million a year. “Today’s materials still need advances for large-scale deployment. Our role is to help enable the advances to allow them to become cheap enough and durable enough to get to manufacturing.”

Robot Tests Resiliency of Hydrogen Refueling
A bright yellow robot the size of a power forward bends and twists a hydrogen fueling hose hundreds of times a day, testing the durability of the hoses that someday soon will refuel America’s hydrogen vehicles.

The robot is the colorful keystone of the hose reliability project at the Energy Systems Integration Facility (ESIF), the newest building at the Energy Department’s National Renewable Energy Laboratory (NREL).

With a long arm where its nose should be, the robot simulates the bending and twisting that humans do when they refill their gasoline engines today, and what they’ll do in slightly different fashion in 2015 and beyond as car manufacturers bring vehicles powered by hydrogen fuel cells to market.

The robot has a twisty wrist that can turn the hose assembly deftly onto a pin to mate with the vehicle’s exterior where the refueling will happen. The repetitive motion puts stress on the hose, so researchers can identify opportunities to increase the lifespan and reduce the cost of the hose assembly. The test also includes low-temperature and pressurized hydrogen gas conditions that will be part of the real-world refueling process.

NREL Senior Engineer Kevin Harrison notes that today’s gas stations use the same hoses for thousands of fill-ups before they need to be replaced, and hydrogen fuel cell stations will need to reach that same level of reliability with their hose assembly. “This is a matter of adding value and working with industry to reduce the cost of the hose and the hydrogen infrastructure in general,” Harrison said. “This facility [ESIF] allows industry to perform testing they can’t do anywhere else in the world.”[wzslider height=”400″ lightbox=”true”]