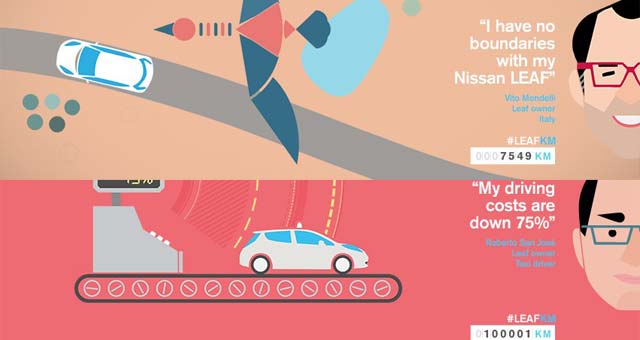 Drivers of the Nissan LEAF – the world’s best-selling electric car – are racing towards the 1 billion kilometer mark. And some drivers are leading the pack.

Nissan has created a series of animated stories to celebrate the race to 1 billion electric km featuring owners, beginning with Roberto San Jose.

Roberto, from Valladolid, narrates his own story as the first taxi driver in Spain to buy a Nissan LEAF, explaining that since buying his Nissan LEAF in October 2011 he has covered over 100,000 km and eliminated three quarters of his running costs.

“As long as my car is my business, my car will be a Nissan LEAF,” he says. The LEAF makes perfect sense. It’s relaxing to drive and it’s such a smooth ride that my clients love it too.

“Stories like Roberto’s are powerful reminders of how buying a Nissan LEAF can revolutionize a business today. He is one of many pioneers reaping the unique benefits of electric vehicles – and that number is growing by the day,” said Jean Pierre Diernaz, Director of Electric Vehicles for Nissan Europe.

Following Roberto, Nissan has launched animations featuring the stories of LEAF owners Pascal di Stefano and Vito Mondelli. Pascal, from Aix-en-Provence in France reveals how he has rediscovered his pleasure of driving in his Nissan LEAF. “I bought it as a second car,” he explains, “but in fact I mostly use the LEAF now.”

Vito Mondelli, from Bari in Italy, tells us of the time he decided to drive to the picturesque town of Taranto, over 100km away. His friends said he would never make it in an electric car however he proved them wrong, knowing that when fully charged he can drive his LEAF well over 100km, even on the motorway. His animation shows how he covered the distance in style, leading Vito to the conclusion that in his LEAF he feels he “doesn’t have any boundaries.”

As further landmarks are reached on the race to a billion kilometers, Nissan will release three further animations, telling the eye-opening stories of Laura Farina, Italy’s proud first-ever Nissan LEAF owner, and Sue Terry and Darren Golder from the UK, all of whom find LEAF has radically changed their driving experience.

It is estimated that the billion kilometer mark will be passed by January 2015 – rising sales and a rapidly expanding quick charge network mean the target might be beaten even earlier.

While the date of the achievement might move, there can be no denying the total kilometers covered globally. Thanks to Nissan LEAF’s CarWings telemetry, an accurate log of the total distance covered by every car has been recorded since the car was launched in 2010.