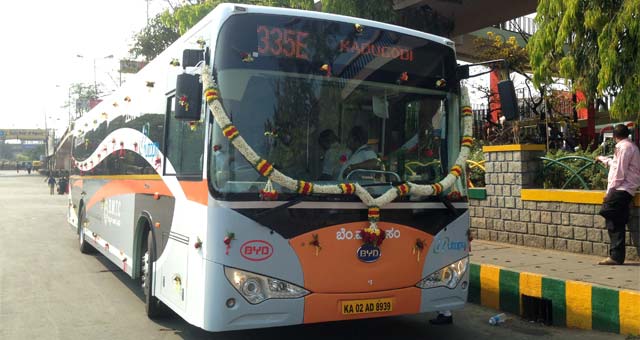 Often referred to as the “Silicon Valley” of India, Bangalore is also known for its challenging air quality problems.

Although the electric bus comes with a higher initial price tag, officials expressed confidence that the total cost of ownership for the vehicle would make initial investments well worth the price.

The list of vehicle benefits is long; including the fact that it is quiet, does not pollute, and has low operational and maintenance costs. The bus has been operating successfully in various European countries besides China, officials said. The bus fare will be equivalent to that of other buses, currently operating in the same urban areas. Given the difference of the electric price and diesel price, the BYD electric bus is not only zero emission but also has high economic value. Traditional diesel buses consume 0.55 L of diesel per kilometer in India, but by comparison, BYD’s 40 foot all-electric bus only consumes about 1 Kwh electric per kilometer (with no HVAC). The results are that millions in cost savings can be realized in Bangalore. Last year, the Indian government reviewed the “national electric vehicle plan (2020)” and announced that India planned to put in place as many as 6-7 million new energy vehicles by 2020. The national heavy industry ministry is responsible for implementing the plan.

BYD’s pure-electric bus employs many advanced technologies developed in-house by BYD’s staff of more than 15,000 engineers. The advanced environmentally friendly, Iron-Phosphate (or “Fe”) batteries, in-wheel hub motors and regenerative braking. The break-through BYD Iron-Phosphate battery is fire-safe and non-toxic: there are no caustic materials contained in the battery, no toxic electrolytes or heavy metals and can be completely recycled. The BYD electric bus delivers a host of operational and environmental benefits for public transport riders, operators and people in the community – it is very quiet and ensures a comfortable ride without vibrations, jerks or noise associated with the conventional buses and combustion engines. The bus can also drive for more than 250 km (155 miles) even in heavy city traffic on a single charge. The bus has completed more than 20 million kilometers of “in revenue service” and has been evaluated in many major cities all over the world.