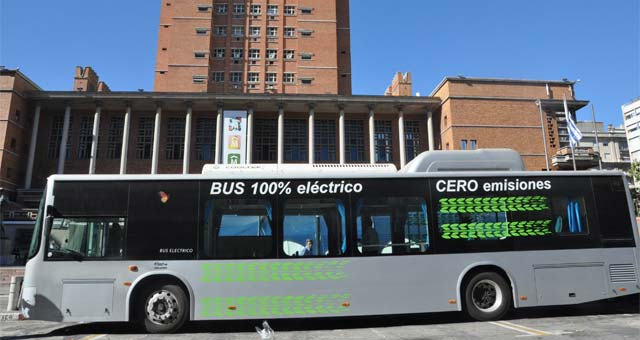 The Uruguay Ministry of Industry Energy and Mining together with the Ministry of Transportation, The Government of Montevideo and Uruguay’s National Utility Company (UTE) released the testing results of the BYD zero-emissions, pure-electric, 12-meter, Rapid Transit eBus (K9) and BYD e6 pure-electric eTaxi last week.

UTE led the evaluation projects for the BYD electric bus and eTaxi for the past four months under the “Uruguay Electric Mobility Committee” with the cooperation of local BYD partner, CTS Auto S.A.

The BYD electric bus was tested for 1,279 kilometers (~800 miles) across 4 different Montevideo urban routes, at different times and with different speeds.

According to the testing results, the average range of the bus was 252 km (~157 miles) per night-time charge and the average energy consumption was 1.26 kWh / km (for the 324 kWh battery pack).

The main conclusion offered by UTE was that, “the BYD electric bus is ubiquitously functional operating in the Uruguay Metropolitan Transport Systems.” Minister Kreimerman (of Industry and Energy) emphasized, “Electric vehicles reduce environmental pollution, city noise pollution and national fossil-fuel dependence. Considering that the transportation sector represents over 30% of the total energy consumed in the country, it is very important to domesticate this fuel spend.” He concluded that, “The electrified public transportation is in pivotal for the country’s energy policy and the transformation to renewable energies.”

Transportation Minister Pintado said, “We must adopt new technologies in public transport arena and provide better and sustainable services to our citizens.” The Mayor of Montevideo, Mrs. Olivera, also supported that “electrified public transport is a solution to avoid green house gases (GHG) and reduce air and noise pollution.” According to the presentation of the National Director of Energy, Mr. Mendéz, “Uruguay imports 100% of their fossil fuels and so the use of electric vehicles increases national energy independence and security considering that 90% of the electricity Uruguay could be produced from renewable sources.”

The economic study presented by one of the members of the Committee, Mr. Gonzalo Marquez, showed that the life time total-cost of ownership (TCO) of an electric bus was 60% less than a standard diesel bus (considering initial purchase costs, energy re-fueling cost and the lowered maintenance cost of electric buses during operation). In the case of electric taxis analyzed, the life time total cost of ownership was estimated at 50% that of traditional gasoline taxis.