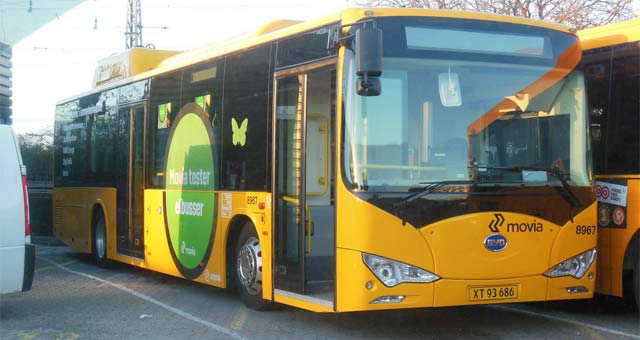 What could be a distance record unmatched by any pure electric bus has been recorded with minimum fanfare by a BYD electric bus on trial with Copenhagen Denmark bus operator City-Trafik.

The 12 meter BYD electric bus completed its normal service on Route 12, a total distance of 110km (or 68.4 miles) carrying an average of 40 passengers. Then the electric bus set off along the Ballerup highway – a standard motorway – and further covered a distance of 215km (or 133.6 miles) ending the day with 8% of battery charge remaining, clocking up a total of 325km (202 miles) on a single charge.

This result exceeds the previous best performance of a BYD electric bus during the company’s Europe-wide trial programmes. Last year an electric bus achieved 310 km (192.6 miles) using only 69% of total charge between the Polish cities of Warsaw and Krackow.

A second trial of a BYD electric bus in Copenhagen with the city’s other operator Arriva produced a no less impressive result. The bus completed an arduous full day of city operation – 150km (or 93 miles) from 06:00 to 16:50, operating fully loaded and with the electric heating system in constant use. The bus was then taken on a 90km (or 56 miles) motorway run and again ended up with a 8% charge remaining, covering a total distance of 240 km (149miles) on a single charge.

The two BYD electric buses have been in service in Copenhagen since the beginning of January, in the hands of Movia’s two service providers City-Trafik and Arriva. The bus, specially equipped to handle the rigors of the Scandinavian winter, has performed well. Operating costs have been low – electricity in Denmark costs 2DKK (€0.27) per kWh at normal prices. This compares with diesel at 9.79DKK (€1.3) per litre.